Analysis: What's next for Cardinal Pell?

On Wednesday, Cardinal George Pell was sentenced to six years in prison following his conviction on five charges of sexual abuse of minors. He will be eligible for parole in three years and eight months. 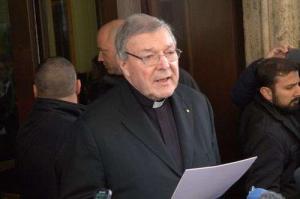 Melbourne, Australia, (CNA) - While the passing of sentence normally marks the end of a case, Pell's situation is far from resolved. Although he remains in prison, his appeal is expected to be heard in June. Meanwhile in Rome, a canonical process is due to be held to examine the same charges against him.
For the time being, Pell remains a prisoner of the state and a sitting cardinal '" a combination unprecedented in modern times.

Commentators, both Catholic and secular, continue to question how the jury reached their unanimous verdict on the evidence. At the same time, victims' advocates are demanding that Pell be removed from the college of cardinals, and even the clerical state, with the same haste used to deal with Theodore McCarrick.
In the middle of this situation, many have been left asking: what is next for Cardinal Pell?
Although the Vatican has announced that a canonical process will examine the charges against Pell, those looking to McCarrick's case as an example are likely to find it a false comparison.
McCarrick faced a litany of accusations and accusers '" minors and adults '"  stretching back decades. Cardinal Pell is facing a single accuser in criminal court. While it looks likely he will also face a lawsuit over allegations dating back to the 1970s and his time as a priest in Ballarat, prosecutors have already dropped plans for a criminal trial on these grounds.
McCarrick, of course, never faced a day in civil court. Consequently, there were no court documents or witness transcripts to consider during the canonical process. Given the strength and volume of the accusations he faced, the Congregation for the Doctrine of the Faith dealt with McCarrick using a stream-lined administrative process.
Pell's canon lawyers are likely to argue for, even insist on, a full trial in Rome '" itself a far lengthier process which could take at least as long as Pell's civil trial.
Before this can even begin, the initial stages of the canonical process involve a preliminary investigation charged with gathering readily-available information on the charges. This will almost certainly include the evidence used in court to convict Pell in Victoria, but Vatican investigators and Pell's own canonists will be equally interested in any new material that becomes available during his appeal.
While a canonical process against Pell may well be officially underway in Rome, it is highly unlikely to begin in earnest until he is either vindicated by an Australian appeals court or exhausts his appeal options.
Back in Victoria, Pell's legal team are basing their appeal to the Supreme Court in Victoria in part on the "unreasonableness" of the jury's finding.
"The verdicts are unreasonable and cannot be supported, having regard to the evidence, because on the whole of the evidence, including unchallenged exculpatory evidence from more than 20 Crown witnesses, it was not open to the jury to be satisfied beyond reasonable doubt on the word of the complainant alone," his lawyers wrote in their filing.
At the center of much of the criticism of the decision against Pell is the apparent lack of corroborating evidence or testimony. Pell's lawyers were not permitted to question the wider reliability of his accuser, despite the supposed second victim having died in 2014 after repeatedly denying he had been abused.
While the eight men and four women were satisfied beyond reasonable doubt of Pell's guilt, a previous jury returned a split decision of 10-2 in favor of acquitting Pell, multiple sources told CNA, resulting in a mistrial. Many have asked if the second verdict was a condemnation of the Catholic Church in Australia, rather than Pell in particular.
Others have noted the decades of media focus and vilification directed personally at Pell, but having nothing to do with the charges he faced. During the hour-long televised reading of the sentence, Judge Peter Kidd noted "it is fair to say that in some sections of the community [Pell is] a publicly vilified figure."
"We have witnessed, outside of this court and within our community, examples of a witch-hunt or a lynch mob mentality in relation to you, Cardinal Pell. I utterly condemn such behavior," Kidd said.
The extent to which this mob mentality might have played a role inside the court will likely feature in Pell's appeal. Such a mentality was crucial in overturning the conviction of Archbishop Philip Wilson last year, when a judge found that the conviction was aimed at the Church as an institution and did not reflect the evidence against Wilson.
With the threat of a second trial lifted, it also seems unlikely the appeal process could be subjected to the same draconian media restrictions that covered the first hearing of the case, allowing the evidence against him to receive the same scrutiny and criticism to which Pell has been subjected for decades.
In the interim, despite calls from advocates and victims' groups, Rome seems unlikely to take any further action regarding Pell in the near-term. While the official Vatican response has remained scrupulously respectful of the Australian courts, privately many in Rome have expressed horror at the verdict, including many of those relieved to see Pell removed from his work reforming the Vatican finances.
Pope Francis will have no desire or incentive to preempt Pell's appeal or appear to vindicate a contentious verdict by removing him from the college of cardinals, still less run the risk of being seen to have hung him out to dry if the appeal should prove successful.
Before his incarceration, Pell was under precautionary measures not to engage in public ministry or have contact with minors during his trial. Now, with Pell reportedly in solitary confinement for most of the day, these measures are somewhat redundant.

According to Australian prison authorities, prisoners are not permitted to lead religious services or have wine, meaning that Pell cannot say Mass, even privately, under his current conditions.

With no definitive result in either the civil or canonical courts, and no further limits on Pell's freedom possible, what follows now for his critics and supporters, both in Rome and Australia '" and for Pell himself '" is likely to be a long wait until June.