Jesus has a mission for youth in Madagascar, Pope Francis says

Jesus has called you and has entrusted a mission to you, Pope Francis told a crowd of young people at a prayer vigil in Antananarivo, Madagascar Saturday. 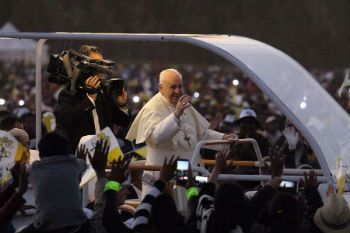 "Through you, the future is coming to Madagascar and to the Church," the pope said in the diocesan Soamandrakizay field Sept. 7.

"The Lord is the first to trust in you, but he also asks you to trust in yourselves and your own skills and abilities, which are many," he continued. Jesus "wants to change us and to make our lives a mission."

According to organizers, there were about 100,000 people present for the meeting, so far the largest gathering during the pope's six-day trip to the African countries of Mozambique, Madagascar, and Mauritius.

In his message, Francis preached against falling into bitterness, which he said can be a temptation for young people, especially when they lack basic necessities or the means to pursue studies, or cannot find a stable job. "Beware of this bitterness, beware!" he added.

But, he said, "the Lord is the first to tell you no! [Bitterness] is not the way to go."

"The Lord calls each of us by name and says: Follow me! He does not call us to run after mirages, but to become missionary disciples here and now."

"He is the first to reject all those voices that would lull you to sleep, make you passive, numb and apathetic, and thus prevent you from seeking new horizons," he continued. "With Jesus, there are always new horizons to be sought."

Jesus also tells Catholics not to be afraid to get their hands dirty, he pointed out, explaining that Jesus' disciples "must not keep still, complaining or looking inward. They need to be on the move, acting, committed, certain that the Lord is supporting and accompanying them."

Pope Francis said he thinks of every young person as a seeker: "Each person shows it differently, but deep down all of you are looking for the happiness that no one will be able to take from us."

The pope responded to two testimonies he heard from young adults in the course of the vigil. One was from a 27-year-old man named Rova Sitraka Ranarison.

Pope Francis commented on the story of the young man, who had recounted that he had for a long time felt a desire to visit prisoners, so he had begun to help a priest's prison ministry, and eventually became more and more involved, adopting it as his "personal mission."

"You realized that your life is a mission. This search, born of faith, helps make the world in which we live a better place, more in accord with the Gospel," Francis told Rova.

He also noted the transformation the young man experienced, that it "changed your way of seeing and judging people. It made you a fairer and more sensitive person."

Rova, the pope said, learned to see people as the Lord sees people. "He does not call us by our sins, our errors, our faults, our limits, but by our name; each of us is precious in his eyes."

He added that Jesus never abandons his children; no matter how far they have wandered, he is always there, calling and waiting for them to return to him and start over.

Pope Francis also pointed to the testimony of a 21-year-old woman, Vavy Elyssa Nekendraza, who he said made this point well: that "it is impossible to be a missionary disciple all by ourselves."

An encounter with Jesus as individuals and as a community is essential, he said.

"Certainly, we can accomplish great things on our own, but together we can dream of and undertake things undreamt of! Vavy put it nicely: we are invited to find the face of Jesus in the face of others."

Catholics, he continued, are one great family that has a mother, the Blessed Virgin Mary, patroness of Madagascar.

"She, Our Mother, looks at this great assembly of young people who love her and seek her in the silence of their hearts, despite the noise of the world and the chatter and distractions of the journey," he concluded.

"To Mary I entrust the lives of each of you, and those of your families and your friends. May you never lack the light of hope, and may Madagascar be increasingly the land the Lord has dreamt of."