With plea to global community, Rohingya mark 2 years as refugees

Two years after a surge of state-sponsored violence in Burma forced more than 1 million members of the Rohingya Muslim minority group to flee the country, the refugees are calling for international action. 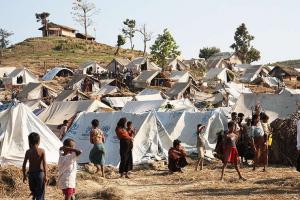 According to UCA News, more than 200,000 people gathered for what they called "Rohingya Genocide Day," demanding justice for their loved ones killed by the Burmese military and protection for their future.

In August 2017, the Rohingya faced a sharp increase in state-sponsored violence in Burma, also known as Myanmar.

The Burmese government refused to use the term Rohingya, and considers them illegal immigrants from Bangladesh. They have been denied citizenship and numerous other rights since a controversial law was enacted in 1982.

The violence reached levels that led the United Nations to declare the crisis "a textbook example of ethnic cleansing."

More than 1 million Rohingya fled across the border to Bangladesh, and are living in refugee camps, many of which are located in a swampy sort of "buffer zone" along the border between the two countries.

While the Burmese government claims that the Rohingya are now peacefully returning to the country, that narrative has been called into question by reporters who visited the region.

Muhib Ullah, coordinator of Arakan Rohingya Society for Peace and Human Rights, told UCA News that the Rohingya want to return to their homeland, but only if their safety is guaranteed.

"Every Rohingya will go back to Myanmar once their rights are realized there," he said.

Organizers of the Aug. 25 rally called on the international community to put pressure on Burma to ensure their safety and recognize their citizenship.

James Gomes, regional director of Caritas Chittagong, stressed that Bangladesh has done everything in its power to shelter the refugee who arrived at its borders.

"Now the international community should take serious note of their demands so that the crisis can head to an acceptable solution," he told UCA News.