During the plenary assembly celebrating its golden jubilee, the leadership organization for bishops' conferences in Africa elected Cardinal Philippe Ouedraogo of Ouagadougou as its president. 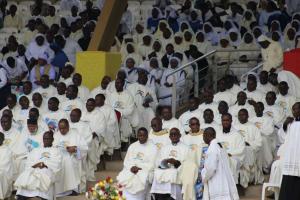 Kampala, Uganda, (CNA) - The July 19-29 plenary assembly of the Symposium of Episcopal Conferences of Africa and Madagascar was held in Kampala and was devoted to the theme "That they may know Christ and have life in abundance."

In its closing message, given July 28, SECAM called its golden jubilee "a time of thanksgiving" and of communion.

The symposium said the jubilee is "a commitment to the service of reconciliation, justice and peace which promotes communion and pastoral solidarity which enables us to stand together against: ideological colonization, land grabbing, political and democratic destabilization, human trafficking, terrorism and arms trafficking, etc."

The bishops added that SECAM is to be "a sign of hope, especially for families and our countries."

They noted that "the family founded on the union of man and woman remains the first place of evangelization; that is why SECAM has kept insisting on its importance, vocation and nature as ordained by God."

They highlighted the importance of integral human development, and "the socio-political dimensions of evangelization and calls on politicians and governments to work for the wellbeing of their people."

The Ugandan martyrs, the bishops said, "remind us of the importance of remaining faithful to our faith in Christ and to our baptismal commitment. They are also models for all the baptized, especially the catechists."

SECAM also noted that children "need to be given special attention and quality Christian education to make them effective witnesses to Christ."

They drew attention to the "irreplaceable role" of women in the Church and society, saying, "their participation in education and evangelization is indispensable."

At the plenary assembly, the members of SECAM also made a number of commitments and exhortations.

They committed to investing " more deeply in the biblical, theological, moral and spiritual formation of all the baptized; to nourish them with the word of God and the sacraments, so that they may make the gospel penetrate all aspects of life," and to making the jubilee "a springboard for the new evangelization."

The bishops also committed themselves to promoting " the human formation and the professional, moral and spiritual education of children and the youth and to help them to be more deeply rooted in the values of the gospel," as well as deepening collaboration with political leaders and holding them accountable, " so as to put our human and natural resources at the service of development, reconciliation, justice and peace."

They exhorted religious communities to be true to their vocation and to engage in "missionary exchange" among dioceses, and recommended that "the formation of priests should aim at helping them to develop a deeper personal intimate relationship with Christ, human and spiritual maturity, a sense of service and accountability and passion for the mission of the church."

"We encourage the particular Churches to engage in the formation, accompaniment and guidance of civil servants and politicians in their respective locations so as to fight against corruption, promote good governance and better management of human and natural resources," the bishops added.

The symposium grew out of the desires of the African bishops at the Second Vatican Council to speak with one voice. SECAM's stated mission, according to its website, is to "to promote its role as a sign and instrument of salvation and to build the Church as a Family of God in Africa," while also preserving and fostering communion and collaboration among its member episcopal conferences.

Cardinal Ouedraogo announced at the assembly that SECAM will be issuing a "Kampala Document" after the assembly, to "help the people of God to deepen their knowledge of Christ our Savior and make him known as the Way, the Truth and the Life."

The symposium intends the document to "become a reference text for our mission."