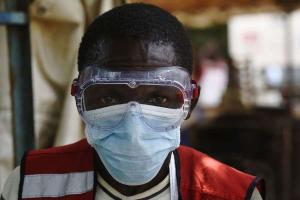 "But while Ebola is a frightening disease, we've seen almost a year of critical preparedness efforts on the part of the Ugandan government, and now immediate action by the Ministry of Health and international partners, to quickly contain these cases so far while avoiding its spread."

Two deaths from Ebola have been confirmed in Uganda in recent days, as the neighboring Democratic Republic of Congo (DRC) continues to fight an outbreak of the virus that has lasted nearly a year.

Catholic Relief Services said it is working closely with government authorities and local partners in the Kasese District of Uganda and surrounding areas.

"For now, CRS will focus on making sure its partners are safe and can continue their other important work in this new reality," De Goeij said.

An outbreak of Ebola began in the DRC in August 2018. Since then, it has killed more than 1,300 people in the country, making it the second largest outbreak in history.

Efforts to contain the disease have been hampered by misinformation and distrust on the part of local communities, who in some cases have retaliated against health teams by attacking them. More than 100 attacks on medical centers and staff have been reported this year, according to the BBC. This has limited many of the health services that non-governmental organizations are able to provide.

Catholic Relief Services has been supporting local Caritas partners in responding through education campaigns to help residents know how to prevent and respond to the virus.

More than 100,000 people have received the Ebola vaccine, according to the Associated Press, but many more are fearful of it and refuse to receive it. In addition, violence in the eastern part of DRC has made it difficult to reach some areas of the country, and difficult to monitor the virus as it spreads.

For months, public health experts had feared that the virus could spread to surrounding countries. The two confirmed Ebola victims in Uganda had recently attended a funeral in DRC.

A handful of other suspected cases in Uganda have been reported, but have not been confirmed. An experimental Ebola vaccine was approved for use in Uganda this week.

The Kenyan government is also on alert for cases that may cross the border into the country.

Ebola is a deadly virus that is primarily spread through contact with bodily fluids. Symptoms include fever, vomiting, diarrhea, muscle pains and occasional bleeding. The disease is fatal in up to 90 percent of cases.

Several outbreaks have taken place in Africa in recent decades. An outbreak in 2014-2016 in West Africa killed more than 11,000 people and spread briefly to Spain, the United States and the UK.

During that outbreak, Catholic Relief Services and other Catholic groups worked to treat those who were infected, support Ebola orphans, provide food support and educate people on hygiene practices to help avoid the spread of the virus, such as hand washing and avoiding contact with dead bodies.

Suzanne Van Hulle, a Catholic Relief Services team member who worked on the agency's response to the West Africa outbreak, stressed the importance of education in fighting Ebola.

"During an Ebola outbreak, information and understanding people's perception about the virus is just as important as medicine or a vaccine," she said.

"Local community leaders play a critical role in educating people around Ebola and how to prevent both acquiring the virus and ongoing transmission."