Some 200 Rwandans were blocked by national troops from crossing the border with Uganda to attend a pilgrimage in the neighboring country on Monday. 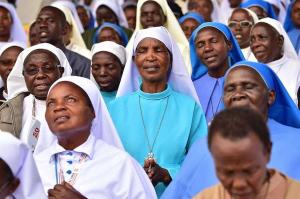 Kigali, Rwanda, (CNA) - The pilgrims were turned back amid ongoing tensions between leaders of the two countries.

Janinah Busingye, an official in one of Rwanda's border towns, told AFP, â€˝More than 200 Rwandans who were coming to attend Martyrs Day were stopped by the military from crossing to Uganda and sent back."

One Rwandan pilgrim told AFP that her group was prohibited from crossing the border by officials who cited security reasons.

Rwanda has blocked people from crossing the border with Uganda for three months, according to the BBC. The closures have affected Rwandans living in border towns, who cross into Uganda to work and buy food.

While Ugandan President Yoweri Museveni and Rwandan President Paul Kagame supported each other during their country's respective revolutions, they have had a tense relationship in recent months, each accusing the other nation of interference and mistreatment of its citizens.

The Feast of the Ugandan Martyrs is held annually on June 3. It is celebrated at a shrine built on the site where most of the martyrs were killed, about 10 miles northeast of downtown Kampala in Uganda.

Each year, the commemoration draws millions from around the globe, including Kenya, Tanzania, and the Democratic Republic of Congo, according to Africa News.

The feast honors 24 Catholic martyrs from the country, 22 of whom were killed between 1885 and 1887 under King Mwanga of Buganda (now a part of Uganda), and two others who were killed in 1918 in Northern Uganda. Twenty-three Anglican Ugandans were also killed for their Christian faith within the same time period.

The martyrs were primarily pages in the court of King Mwanga, who grew increasingly intolerant of Christianity, likely for two reasons: he saw it as a threat to his power, and he resented the young Christian pages who rejected his sexual advances.

The Christian converts were tortured and executed by the king. Popular devotion to the martyrs remained strong in the country, and they were beatified June 6, 1920. Bl. Paul VI canonized the group Oct. 18, 1964.

Archbishop Antoine Kambanda of Rwanda celebrated Mass at St. Charles Lwanga Parish in Kigali for pilgrims who were unable to attend the Ugandan commemoration, AFP reported.