As part of his efforts to increase interreligious peace, Ghana's chief imam attended Easter Mass ahead of his 100th birthday celebration. 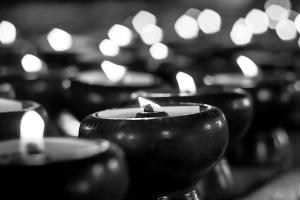 According to GhanaWeb, parish priest Father Andrew Campbell welcomed the Muslim leader, and Christians from the community later visited the imam's house. The country's vice president, Mahamudu Bawumia, applauded the efforts of peace in the country.

"At the time the world is experiencing religious intolerance,...Ghana is enjoying a great collaboration between the two main religions in our country," Bawumia told GhanaWeb.

"As we heard, two days ago, the national imam paid a remarkable visit to the Catholic church in Accra and a day after this historic visit, a group of Christians also paid a visit to the Chief Imam at his home," the vice president said.

According to the BBC, some Muslims have criticized the leader's actions, saying his participation in Christian prayer was shameful. Sharubutu said he was not there for worship but to advance peace and promote a different perspective on Islam.

"The chief imam is changing the narrative about Islam from a religion of wickedness, a religion of conflict, a religion of hate for others, to a religion whose mission is rooted in the virtues of love, peace and forgiveness," Aremeyao Shaibu, the imam's spokesperson, told the BBC.

Sharubutu, who was appointed chief imam in 1993, has been an active promoter of peace in sermons and deeds. According to the BBC, he is also one of the 13 religious leaders in the country's National Peace Council.

Late last year, a protestant pastor predicted that the Muslim leader would pass away in 2019. The prophecy was received with outrage from some Muslims, and the pastor's church was vandalized. Sharubutu reprimanded those attackers, encouraging them to instead forgive the pastor.

In 2016, violence almost broke out after a Tafo chief leader in Kumasi was slapped by Muslims angered over land disputes. The action is considered a cause for war, but Sharubutu spoke to the Tafo chief and calmed the situation.

Interfaith dialogue and peace have also been a major focus of the pontificate of Pope Francis. When the pope was in Bulgaria last Monday, he encouraged a group of faith leaders to view peace as a gift and action.

"Peace is both a gift and a task; it must be implored and worked for, received as a blessing and constantly sought as we strive daily to build a culture in which peace is respected as a fundamental right," he added.