Free World Class Education
FREE Catholic Classes
Most of the meals were met with mixed reviews.

American children were filmed trying seven different foreign school lunches and most were met with disapproval. The video by Cut.com quickly became viral, with over 200,000 views within 24 hours. 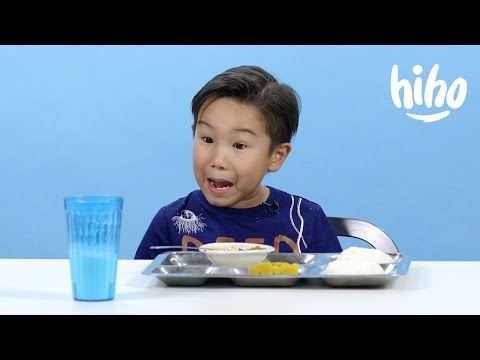 "I apologize in advance. It looks like a big piece of poo surrounded by corn," said a boy after he was given a meal of maize and beans, a traditional Kenyan meal.

A girl was not pleased by the Indian school lunch of Sambar: sweet kesari, rice and chaas. Another boy agreed with her assessment, adding that he felt "sorry for the Indians." Each child featured in the clip was revolted by chaas, a yogurt-based drink popular in India.

The French meal also wasn't appealing to the children. They received ratatouille, grilled salmon, rice, brie, a baguette and fruit yogurt, all of which got mixed reviews. Some loved the brie, but others were not fond of the "fancy meal."

Traditional pancakes, hardtack with cheese, lingonberry juice and a carrot salad from Sweden was also met with mixed reviews.

A boy vowed he would never eat the Japanese lunch, which consisted of curried udon noodles, burdock salad, potato croquette and strawberry-flavored milk.

Surprisingly, the high-energy biscuit from Afghanistan -which the kids had difficulty figuring out- won the taste-test.

"I would go to Afghanistan to get that really, really good cube cookie thingamajig," declared one child.