Why King Herod's slaughter of the innocents makes some men uncomfortable

The account of the Slaughter of the Innocents is only found in Matthew's Gospel. There are no historical records that corroborate the story. Did it really happen? 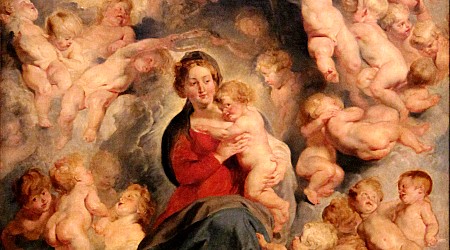 To help us answer that question, we need to take a closer look at the villain of this tale, the King of Judea at the time, "Herod the Great."

If our only reference point about Herod is Matthew's Gospel, we would rightly view him as a paranoid, homicidal figure. But as the first-century Romano-Jewish historian Josephus tells us, Herod was also a gifted and talented ruler, with some impressive accomplishments during his reign.

Herod's many building projects included the renovation and expansion of the Temple of Jerusalem, as well as water projects and other extensive improvements throughout the city. Over a 12-year period he designed and built the city of Caesarea, the first real port city in Israel, using cutting-edge building technology for the time. Though he unjustly taxed his subjects, and at time lavishly spent their money on his many projects, he was a shrewd politician, and an accomplished builder and city planner.

But King Herod was not so successful at managing his royal family.

This is no surprise as he had 10 wives and a host of sons scheming to rise to the top of the pack to succeed their father. Josephus reveals the bloody palace intrigue of Herod's court: The king murdered three of his sons suspected of treason; he killed his favorite wife and her mom; he drowned a High Priest he didn't like claiming it was an accident, and killed several uncles and a couple of cousins.

As Herod was increasingly ill and near death, he wanted the people of Israel to properly mourn his passing. The king feared many of his subjects would actually rejoice when he died, and that really ticked him off. So he arrested hundreds of the nation's leaders and imprisoned them in one of the stadiums he had built, so they could be slaughtered upon his death, thus ensuring a proper period of public mourning.

Yet, in all his writing about King Herod, the historian Josephus doesn't mention the murder of the innocents we read about in Matthew's gospel.

In Matthew's account, Herod learns from the visiting Magi that their astronomical calculations revealed the birth in the last two years of a new "King of Israel." Herod tells the Magi, "Go and search diligently for the child. When you have found him, bring me word, that I too may go and do him homage." (Matthew 2:8)

Thankfully, the Magi, and Joseph the foster father of Jesus, received Heavenly messages to keep Herod in the dark about the location of Jesus, and warned them to get out of town immediately.

When the king got word of this, he was not happy:

When Herod realized that he had been deceived by the Magi, he became furious. He ordered the massacre of all the boys in Bethlehem and its vicinity two years old and under, in accordance with the time he had ascertained from the Magi.  (Matthew 2:16)

So why no mention in the historical accounts of Josephus?

Dr. Paul Maier, a Professor of Ancient History at Western Michigan University, tells us that Bethlehem at the time was a village of 1,500 residents. Dr. Maier shares, "In my actuarial study, Bethlehem at the time wouldn't have had more than about two dozen babies two years old and under --half of them female."

So while this was certainly a shocking tragedy to those traumatized and grieving families, the death of a dozen infants and toddlers was probably not seen as a big story, given the higher rates of infant mortality at the time and the carnage of Herod's reign.  This may explain why we don't read of this event in the scrolls of Josephus.

The Gospel account of the slaughter of the innocents has a special significance in our day. When the story is read at your local worship service after the Feast of Christmas, some men in the congregation may experience some powerful feelings of guilt, grief, anger and shame.

When warned in a dream, Joseph protected Jesus from the murderous Herod.  Fathers who were part of abortion decisions may feel they, unlike Joseph, abandoned their preborn son or daughter to face the slaughter of abortion.

Regardless of the circumstances, men are deeply wounded in their manhood, and their fatherhood, when they participate in the death of their preborn children, or are unable to prevent an abortion they do not want.

This Christmas season, ask your pastor or clergy member to share a message of hope and healing for any woman or man in the congregation, who may, upon hearing the mysterious stories of the virgin birth, the baby in the manger, and the slaughter of the innocents, experience feelings of regret, grief and shame about a past abortion.

Help these grieving parents see that this Christmas and New Year, Jesus wants to encounter them where they are most ashamed, and deeply wounded.  Where there is sin, death and despair, our Lord wants to bring reconciliation, healing and peace.

Ask your church leaders to share information on abortion healing programs that help mothers and fathers of aborted children to journey safely through the painful emotions and memories of their abortion experience, and be transformed by the mercy of Jesus.

Theresa Burke, Ph.D., and Kevin Burke, LSW, are the founders of Rachel's Vineyard and pastoral associates of Priests for Life. They are the co-authors of Rivers of Blood/Oceans of Mercy.