Catholics across the globe took part in an online prayer marathon on Monday marking the world day of prayer against trafficking. 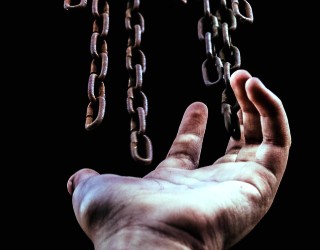 Photo by Zulmaury Saavedra on Unsplash

CNA Staff (CNA) - The prayer spanned time zones from Oceania to the Americas on Feb. 8, the International Day of Prayer and Awareness against Human Trafficking, and the liturgical memorial of St. Josephine Bakhita (1869-1947), patron saint of human trafficking survivors.

The seven-hour global prayer marathon was broadcast via live-stream with translations in five languages, including English. The broadcast included a message from Pope Francis, who instituted the annual day of prayer in 2015.

At a U.S. Embassy to the Holy See event in October, experts reported that online exploitation of victims of human trafficking has increased amid the coronavirus pandemic.

Valiant Richey, Special Representative and Co-ordinator for Combating Trafficking in Human Beings at the Organization for Security and Co-operation in Europe (OSCE), argued that a failure to address human trafficking during the pandemic would "risk turning this very serious public health crisis into a human trafficking crisis."

"The storm clouds are brewing on this and we can see it coming," he said.

Organizers are encouraging Catholics to pray for an "economy without human trafficking" and to support the day on social media using the official hashtag #PrayAgainstTrafficking.

The prayer event was organized by the international committee that promotes the world day of prayer. The committee is coordinated by Talitha Kum, the network of consecrated life against human trafficking of the International Union of Superiors General, with the Migrants and Refugees Section of the Dicastery for Service to Integral Human Development, Caritas Internationalis, the World Union of Catholic Women's Organizations, the Focolare Movement, and grassroots groups.

Gabriella Bottani, the coordinator of Talitha Kum, said: "With 'The Economy of Francesco,' the Holy Father has asked the Church to stop and reflect on the dominant economic model and to find alternative paths."

"We found ourselves perfectly in tune since the trafficking of people is an integral part of an economy of exclusion, where the rules of the market are destroying the fundamental values of human coexistence, based on respect for dignity but also on the protection of the environment."

"The dominant economic model is one of the main structural causes of human trafficking in our globalized world. Through this day, let us trace together a path of reflection for an economy that promotes life and dignified work for all."

To learn more -- visit CatholicOnline.School for a powerful lesson on Human Trafficking.