Father Frank Pavone, National Director of Priests for Life, issued the following statement today in regard to the Supreme Court's decision in the Louisiana abortion case, June Medical Services vs. Russo. 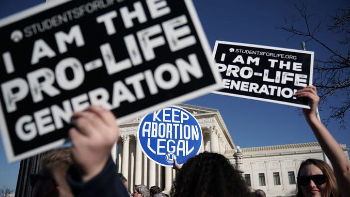 TITUSVILLE, FL -- "The health and safety of women seeking abortion has again been sacrificed on the altar of 'access.' This disappointing ruling underscores the blind eye the abortion cartel continues to turn to the damage abortion does to women," Father Pavone said.

Father Pavone noted that, in addition to its 5-4 ruling striking down the Louisiana law requiring abortionists to have hospital admitting privileges, the Court also found that abortionists do have standing to challenge abortion regulations.

"'We have long permitted abortion providers to invoke the rights of their actual or potential patients in challenges to abortion-related regulations,' Justice Stephen Breyer wrote in his opinion. The majority seems to be oblivious to how outrageous it is that abortionists can object to laws that protect their patients from the abortionists' own negligence, when not a single woman has complained about the law."

Janet Morana, Executive Director of Priests for Life and founder of the Silent No More Awareness Campaign, agreed with Father Pavone.

"So many of the friend-of-the-court briefs filed in this case pointed out the serious health violations in these abortion facilities," she said. "It's impossible to imagine the justices could have read these briefs and then ruled the way they did. Abortion hurts women, and that's OK with the majority of the Supreme Court. It's a very sad day.

Father Pavone added: "Once again this ruling underscores the importance of elections. We need a solid pro-life majority on the Supreme Court to uphold the rights of women and the unborn. President Trump's two appointees voted the right way. We need him to continue appointing the Justices for four more years."

Check for more commentary in the coming days at www.SupremeCourtVictory.com.

Priests for Life (EndAbortion.US)  is the world's largest Catholic pro-life organization dedicated exclusively to ending abortion. Pro-life efforts are working. The abortion rate in America is the lowest it has been since Roe v. Wade and in recent years states have passed more than 400 laws to protect the unborn. The number of freestanding abortion clinics in the U.S. has dropped from 2179 in 1991 down to 710 today, and President Trump has placed 200 pro-life judges on the federal bench.