The British Home Secretary has rejected proposals for buffer zones around abortion clinics throughout England and Wales as disproportionate, after finding that most abortion protests are peaceful and passive. 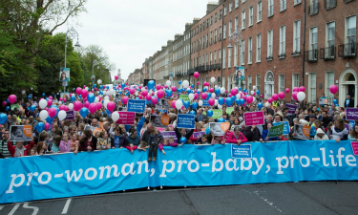 London, England (CNA/EWTN News) - Home Secretary Sajid Javid said in his Sept. 13 decision that after reviewing the evidence, which included 'upsetting examples of harassment ... what is clear from the evidence we gathered is that these activities are not the norm, and predominantly, anti-abortion activities are more passive in nature."

The typical activities of those protesting outside of abortion clinics 'include praying, displaying banners and handing out leaflets," Javid noted.

He added that there were 'relatively few" reports of more 'aggressive activities", such as 'handing out model foetuses, displaying graphic images, following people, blocking their paths and even assaulting them."

Furthermore, he noted that in 2017, only 36 of the 363 hospitals and clinics in England and Wales that offer abortions have experienced pro-life demonstrations near their facilities.

Because the majority of protests are peaceful, enforcing buffer zones throughout the country 'would not be a proportionate response," he said.

Be Here for Me, a group of mothers who have received pro-life help outside of abortion clinics and oppose buffer zones, applauded Javid's decision in a statement on their website.

'This carefully considered decision represents the common sense we have been calling for all along. It demonstrates Sajid Javid's commitment to fundamental civil liberties as well as ensuring that women will continue to be offered much needed help and support. It will mean that people offering this vital support will not be criminalised," said Elizabeth Howard, spokeswoman for the Be Here For Me campaign.

Shadow Home Secretary Diane Abbott, of the Labour Party, denounced the decision as having "given the green light for women to be harassed and abused for exercising their right to choose," according to the BBC.

"This is a disgusting failure to uphold women's rights over their own bodies. Sajid Javid must urgently reconsider," she said.

The decision to reject nationwide buffer zones comes after the High Court of England and Wales upheld a buffer zone imposed by Ealing Council, in west London, around a Marie Stopes abortion clinic. The zone prevents any pro-life gathering or speech, including prayer, within about 330 feet of the clinic.

Two pro-life London women are working to have the decision appealed, including Alina Dulgheriu, who chose to forgo an abortion at the Ealing clinic in question after being offered pro-life support.

Dulgheriu told CNA in July that clinics like the ones in Ealing do not offer women any alternatives to abortion. She said out that her efforts to see the buffer zones overturned are as much for the protection of mothers as for children.

'If the vigils are removed â€" who will look out for the mothers who desperately do not want to go ahead with an abortion? These mothers can be in very vulnerable circumstances, sometimes in abusive relationships, and vigils can offer them housing and refuge that abortion clinics could never provide," she said.

The other woman in the court challenge has filed for anonymity in the court proceedings. The women, who have crowdfunded more than ÂŁ40,000 ($52,000) so far for court expenses, have said they are willing to take their appeal to the UK's Supreme Court if necessary. The appeal is expected to be heard sometime later this year.

In his decision, Javid said that there are already laws in place to protect people against intimidation and harassment in public spaces, including the Public Order Act 1986 and the Protection from Harassment Act 1997.

He also noted that the Ealing case is an example of a local government using civil legislation 'to restrict harmful protest activities."

Javid noted that England and Wales should support both the right to free speech and individual's rights to be safe from harassment and intimidation, and noted that the police are free to act in cases where the law has been violated.

'In this country, it is a long-standing tradition that people are free to gather together and to demonstrate their views. This is something to be rightly proud of," he said.

However, he added, 'I am adamant that where a crime is committed, the police have the powers to act so that people feel protected."