The Struggle to Say No: More than 90% of teen girls face unwanted pressure to send sexts

In a recent study, teenage girls were found to feel powerless when asked for a nude image of themselves from young men, most often saying they felt trapped, bombarded, coerced, and confused when confronted with "sexting" requests. 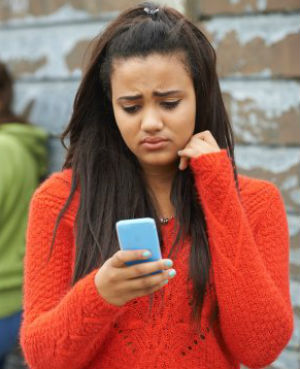 Something needs to be done to help young girls in these situations.

Chicago, Ill. (CNA/EWTN News) - Perhaps even more alarming is that most of the young women in the study reported that the pressure to sext was normal and accepted boys' aggressive behavior as acceptable. Even more, the only negative language the girls used was not against their male counterparts - but instead to describe themselves or other girls.

The study, "What Should I Do?: Young Women's Reported Dilemmas With Nude Photographs," was conducted by Sara E. Thomas, a doctoral student at Northwestern University, and was published by Springer Science and Business Media in December 2017. The study looked at 7,000 stories from girls who posted their experience on the online platform "A Thin Line."

Of the 7,000 experiences, Thomas focused on 462 stories in which girls reported sexting, sending nude photos, and related experiences from the years 2010-2016. The average age of the girls was 15.

Thomas noted the study's limitations, saying that the shared experiences were the result of an anonymous online platform, which neglects to include important information such as the girls' demographic backgrounds and may not be indicative of all young women's experiences. Most of the girls were also adolescent and there was no information given about the male counterparts who reportedly pressured the girls into sexting.

However, the study is able to highlight a number of adolescent girls' struggles when faced with requests for nude photos, most of whom reported that they did not want to send the images. Also noteworthy was the most common reaction among the girls when asked for photos: "What should I do?"

"Teenage girls know the potential risks and are disinclined to [sext], yet they continue to share their images anyway. They struggle to say no," said Thomas, in an interview with Northwestern Now.

Thomas also noted that the girls seem to be ill-equipped with the resources and tools necessary to face pressured requests from young men.

Of the girls who sent nude photos, "more than 90 percent...engaged in what could be considered unwanted but consensual sexting to either prove their affections or avoid reproach or conflict with their partners," the study reported.

The study also noted that none of the girls who sent nude photos felt relieved or good about their choice. In addition, 40 percent of the stories said their nude photos were sent to unintended audiences. One girl reported that her nude image ended up on the personal phones of over 300 people.

"It appears that a desire for status, love or pressure from boys to be 'good girlfriends,' threats, anger or relational consequences compel them to consider sending photographs," the study said of the girls who were asked to send nude images.

Of the girls who refused, 31 percent said there were repercussions for not engaging in sexting or sending nude images, such as "having the boy get angry, break up with them, or make more requests despite their refusal."

In addition, a number of the girls expressed a level of normalcy in being asked to provide nude images or engage in sexting. They also did not describe their male counterparts as blameworthy, but instead described themselves as "weak," "pathetic," having "ridiculously low self-esteem," or a "horrible person."

When not describing themselves, the girls sometimes used negative language against other girls, calling those who did not send nude images "prudes."

"Rather, it is the aim of this study to explore the struggles young women experience and to elaborate on our current understanding of young women's dilemmas as they develop romantic and sexual relationships in this digital era."

Thomas also added that young women need support and information on how to navigate pressuring situations from males, while there is also an overwhelming need for males to act with respect and boundary acceptance.