Between the Harambe memes and quick explanations of Catholic doctrine on his Twitter page, Richard Umbers, Auxiliary Bishop of the Archdiocese of Sydney, says that online humor is about more than just the laughs. 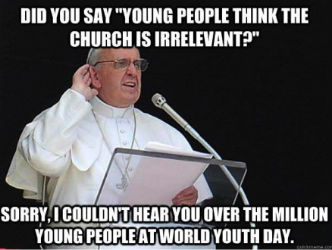 An example of a Catholic-inspired meme

Sydney, Australia (CNA) - In fact, he says, Christian humor online can help to reach out to parts of our modern world that are in the process of secularization. This kind of online engagement - with a wink - plays into a larger need for Christians to engage in society and to promote a vision of Christian life.

Bishop Umbers is quick to note in his Twitter bio that he is indeed an "actual person and a realbishop", adopting the description given him by Tommy Tighe, the "Catholic Hipster".

Whether in art, online culture, or political discussion, Christians should be giving an example of how to evangelize and to speak to the challenges society faces today. "You need the contemporary expression of Christian faith," Bishop Umbers said of what the Church needs from its faithful today.

The writings of Benedict XVI, and Pope Francis' Laudato si can provide such a template for living an "alternative" lifestyle as a Christian, while also speaking to contemporary culture, he indicated.

"You can promote a coherent alternative lifestyle, which is what Catholicism really is in our society."

Bishop Umbers was born and raised in New Zealand, joining the personal prelature of Opus Dei before moving to Sydney to finish his degrees in economics. After guidance from a mentor, he discerned a call to the priesthood, upon which he travelled to Rome and then to Spain to continue his studies. He was ordained a priest of the prelature in Spain in 2002. Fourteen years later, Umbers was consecrated a bishop, becoming in 2016 the youngest bishop in Australia, at the age of 45.

Five or six years ago, he told CNA, he got his first Twitter account and started to use it regularly. In the past several years, he has used his Twitter account to reach out on issues affecting Australian society - as well as to joke about a variety of topics: "You can have fun with memes."

Part of the reason he's drawn to memes, Bishop Umbers said, is not only because they match his sense of humor, but because of his own limitations. "I have an artistic vision with zero talent," he joked.

More seriously, memes do indeed convey a message. Like political cartoons, which have spread powerful ideas and opinions for centuries, memes can also convey earnest information.

The creation of a meme culture in online Catholic spaces, or use of other kinds of social media outreach can help reach out and participate in conversations. In fact, he said, people tend to take notice when a conversation is constructive, rather than a "flame war." Also, he warned, any conversation can sometimes face the threat of miscommunication, or being "overly ironic."

Honesty and consideration can add balance to online evangelization. "I tell people all the time: be yourself," Bishop Umbers said. He also advocated that Catholics online display their convictions, and even make "strong comments" - but also advised them consider what they say before they type.

The bishop also urged that Catholics online have faith and conviction in their beliefs - especially if they dabble in memes or in online discussions. "[It] takes a certain confidence in your own faith," he said of online participation and discussion. This confidence can even help bring out the humor of the whole situation.

While throughout history "believers have always had a go" during important disagreements, poking fun at topics and laughing about the misunderstandings is "a lasting human tradition."

It's this sense of conviction that Bishop Umbers hopes believers can bring to conversations happening not only online, but in the Archdiocese of Sydney.

Australian society is currently experiencing "rapid secularization" and increasing "sectarianism", he said, as issues like abortion, same-sex marriage, and euthanasia come to the center of Australian political debates.

While more Catholics continue to identify as Catholic, as opposed to the shift to "non-religious" among other Christian groups, some Catholic institutions have remained quiet or even supported positions that fly in the face of Church teaching.

"To stand up for Catholic teaching puts you, once again, on the margins": Bishop Umbers explained that taking a counter-cultural position is likely to impact funding of Church programs as time goes on.

Rather, he said, effective communication and coordination seem to be the major stumbling-block facing the Church in the Sydney area.

For example, he pointed to a successful social media campaign started by three young women which protested the expansion of abortion in the Australian state of New South Wales, of which Sydney is the capital. The young pro-life advocates started a Twitter hashtag that started to change the conversation surrounding abortion, and inspired local communities to get involved.

"Because of them, there was a huge campaign across all the parishes to have people sign a petition." More than 80,000 signed the petition, which eventually contributed to the bill's defeat in parliament, the bishop said.

The center of a successful online campaign like the one in New South Wales, or of a meme, or of any mode of evangelization, lies, at its core, in the truth, Bishop Umbers said.

"Really it's an expression of who you are, and I think that's where evangelization comes from," he said of online engagement. "It's not a campaign. It is truly a sharing of your own convictions and your own thoughtfulness."

This article was originally published on CNA Sept. 15, 2017.