A Michigan mother with a lethal form of brain cancer who declined treatment in order to save her unborn child has died, a few days after her sixth child was born. 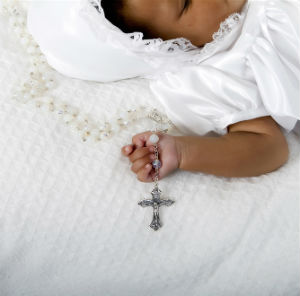 Family uses faith as their guide to save baby's life [not pictured].

Detroit, Mich. (CNA/EWTN News) - Carrie DeKlyen, 37, was a mother of five in April when she was diagnosed with glioblastoma, an aggressive, malignant cancer that typically affects the spine and brain, and is usually lethal.

While she had surgery to remove the tumor, DeKlyen was about to begin a clinical trial treatment when she discovered she was pregnant.

She decided to decline chemotherapy in order to save her unborn daughter, who was born last week and was fittingly named Life Lynn DeKlyen.

"Me and my wife, we are people of faith," Nick told the Detroit Free Press. "We love the Lord with everything in us. We talked about it, prayed about it."

"I asked her, 'What are you thinking?' She said, 'All the treatments, I'm not doing any of them.' We went back to the surgeon. He said 'If you choose to do this, you will not live another 10 months. I promise, you will die.'

Nick said that ultimately, it was Carrie's decision, and she was at peace choosing to save her baby instead of prolonging her own life.

"We're pro-life," Nick said. "Under no circumstance do we believe you should take a child's life. She sacrificed her life for the child."

Carrie's choice to give up her own life for that of her baby has garnered worldwide attention.

While Carrie underwent four brain surgeries to try to treat her tumor, she slipped into a coma in July from which she never regained complete consciousness, though family reported that she would sometimes respond to a hand squeeze or other attempts to communicate.

By September, Carrie had stopped responding to pain. Baby Life was delivered by caesarean section Sept. 6, at 24 weeks and 5 days. The following day, Carrie's feeding and breathing tubes were removed, and she died Sept. 9.

Nick told the Associated Press that some of his last words to his wife were, "I'll see you in Heaven."

During a celebration of her life, held Sept. 12 at Resurrection Life Church in her hometown of Wyoming, Michigan, Carrie was remembered as someone who left behind "a legacy of love," Michigan Live reported.

She was a kind and selfless wife, mother, daughter and neighbor, who sang in the church choir and volunteered in her community, according to numerous friends.

"Carrie, a mom, a soul mate, a daughter, a sister, a friend. Heaven's gain," Pat Binish, the community's pastor, said at the celebration.

Binish added that many had asked on social media why Carrie had to suffer and die.

"Are you ready for the answer? I don't know. Our job as humans is to pray. God's job is to heal, end of story. We don't understand the bigger plan. We don't have the understanding. One day, we will."

The Cure 4 Carrie Facebook page, which the family once used to post updates about Carrie's health, is now being used to update family and friends on Life Lynn, who struggled at first but is now in stable condition in the neonatal intensive care unit at C.S. Mott Children's Hospital.