Free World Class Education
FREE Catholic Classes
'Correspond with the Pope' and 'Talk with the President' were on Mick Carneyt's bucket list.

When Laura Carney was 25-years-old, her father was killed by a teen driver who ran a red light while talking on their cell phone. As a result, Mick Carney missed out on his children's weddings, was unable to see them start their careers and failed to cross off the experiences he listed on his bucket list. 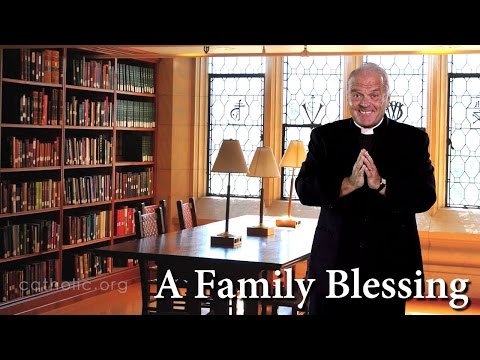 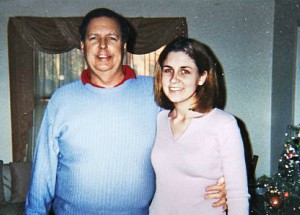 LOS ANGELES, CA (Catholic Online) - According to Laura's blog, she and her brother David discovered their father's bucket list titled, "Things I Would Like to Do in My Lifetime!"

The very first item on his list was, "I would like to live a long, healthy life at least to the year 2020."

Unfortunately, the fatal accident occurred in 2003, which made that particular goal impossible for him to reach.

As the siblings read their father's list, they realized they had already accomplished many of the tasks.

To honor their father, they knew they had to complete the rest of his list for him.

There are a total of 60 items on the list, with five checked off by their father. The Carney siblings' goal is to check off the remaining 55.

In an article she wrote for Good Housekeeping, Laura explained: "Item number 12 says, Give my children the most love, the best education and best example I can give He never checked that one off, but he should have.


The list continued to include the change to "Talk with the president" and "Correspond with the Pope," both of which are possible.

The most recent item Laura has crossed off her father's list was "Run 10 miles straight."

Laura trained for weeks in New Jersey then flew to California to participate in the Los Angeles Marathon on March 19. 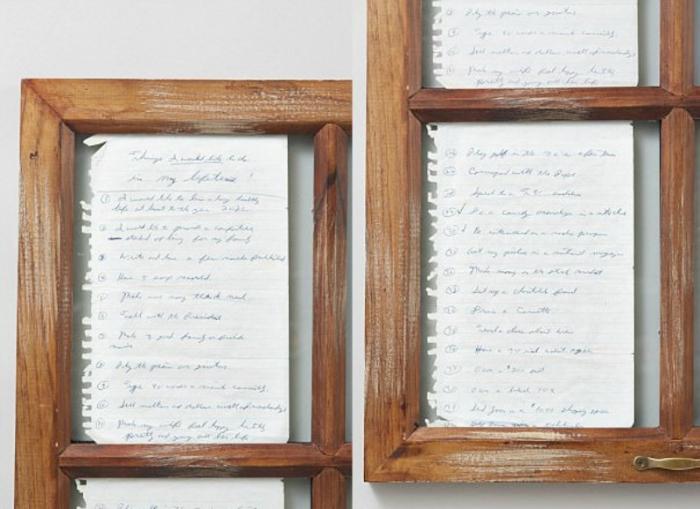 Laura and her brother David are still working to complete their father's bucket list (Mike Garten).

Though she had trained for several weeks, Laura never quite made the 10-mile mark without stopping. She admitted: "I never did reach that 10-miles-straight run before the race. And I worried all week before the marathon that maybe I'd pushed too hard doing nine."

Then the day of the race arrived.

At the site, she noticed stands of free food and drinks so she ate a banana and half a tangerine. She was suffering a cough and was concerned it might make the race even more difficult but she drank some water, used a Porta-potty, and said she felt "pretty confident."

When she began running, she listened to music and thought of her father. The music was inspirational and included songs such as, "Fast as You Can" by Fiona Apple and "We Can't Stop" by MIley Cyrus.

Around the song, "Welcome to New York" by Taylor Swift, Laura admitted she "started peeing."

Mortified but refusing to yield, she continued to run.

"I'd managed to only let the urine out in small spurts at this point, and I figured it would go away and I could hold the rest until the race was over," she wrote.

"Use it, I thought to myself, remembering advice my brother had once given me when I needed to go to the bathroom during a run a few years back. At least this was number one and not number two, I thought. That would have been much worse."

When the runners began to separate from the walkers, Laura realized the slower people made her want to slow down as well.

"This time, it was the slowness of the other runners that was dictating my pace. And making me want to stop.

"Adding to this awful predicament was my now half-full-of-pee shorts.

"I knew I had to make a decision. Was I going to give up, start walking like the rest of these guys...or was I going to storm ahead, dodging them like zombies and decide I didn't care if they smelled or saw the streams of urine running down my legs.

"I chose the latter."

Refusing to give up, Laura kept running and made her father's 10-mile goal. 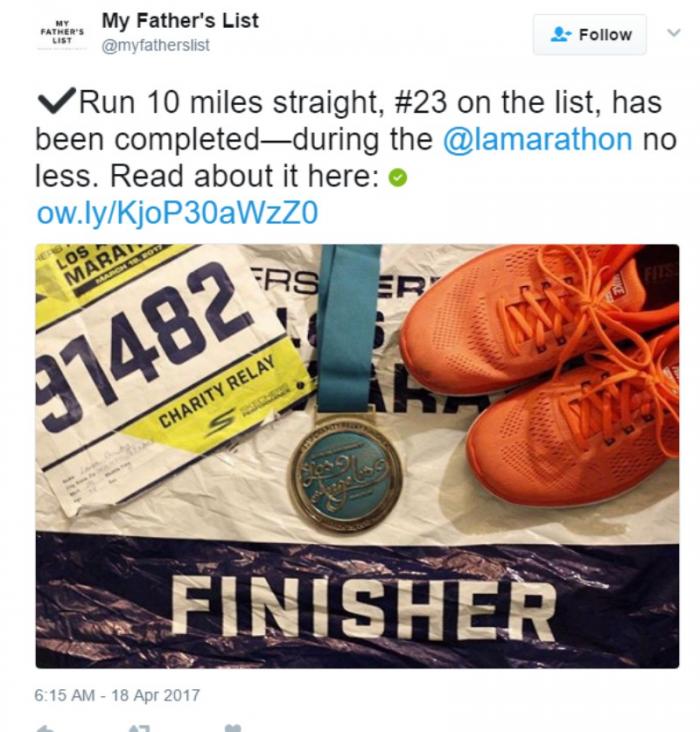 Laura got to complete one of her father's bucket list items (My Father's List/Twitter).

"After I reached 10 miles, I let myself start walking. I gave myself what my dad called the 'atta girl award' - I patted myself on the back, because nobody else was there. I still had three miles until the finish. But making myself proud of me was just enough."

Laura's dedication to follow her father's list has served as an inspiration to others, including her 9-year-old niece, who decided to run "because she wants to be like Aunt Laura."

Laura Carney is a magazine copy editor, writer and illustrator who also works to raise awareness as an advocate with End Distracted Driving, the Safe Roads Alliance, the National Safety Council and the Road to Zero Coalition.

[Editor's Note: A previous version stated Laura is the mother of two, which has since been deleted.]