Free World Class Education
FREE Catholic Classes
Pope Francis has urged the thousands of young people gathered at Medjugorje this week to follow the example of the Blessed Virgin Mary, who leads us closer to Christ.

In a message to the Medjugorje Youth Festival published by the Vatican on Aug. 2, the pope said that "it takes courage" to live like Christ. 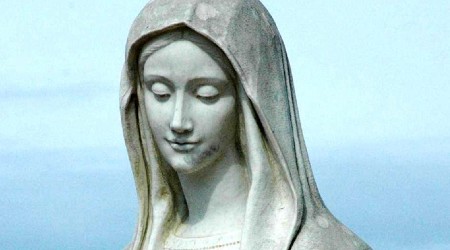 "Beloved, do not be afraid. Go to Him with all that you are carrying within your heart. He is the only Lord who offers true refreshment and true peace. Follow the example of Mary, his and our Mother, who will lead you to Him," Pope Francis said.

"Entrust yourselves to the Stella Maris, a sign of hope on the rough seas, who guides us towards the harbor of peace. She, who knows her Son, will help you to imitate him in your relationship with God the Father, in compassion for your neighbor, and in the awareness of what we are called to be, children of God."

Archbishop Aldo Cavalli, the papal envoy in Medjugorje, read aloud the pope's message on the second day of the 33rd Medjugorje Youth Festival taking place in Bosnia and Herzegovina Aug. 1-6.

"At this moment, in the heart of summer, the Lord invites you to take a vacation with him in the most special place there is -- your heart," the pope said in the message that he signed on July 16, the feast of Our Lady of Mount Carmel.

The Medjugorje Youth Festival, also known as "Mladifest," is focused on prayer and includes daily Mass, Eucharistic adoration, and a candlelight procession.

The theme of this year's festival is inspired by Christ's words in the Gospel of Matthew: "Come to me, all you who labor and are burdened, and I will give you rest."

Pope Francis said that the Lord knows "how difficult life can be and that there are many things that strain our hearts: many disappointments, various wounds from the past, burdens that we carry and injustices we bear, many uncertainties and worries."

"Jesus tells us, 'Come to me and learn from me.' This is an invitation to move, not to stand still, frozen and afraid before life, and to rely on Him. It sounds easy, but in dark moments it becomes natural to close-in on ourselves. Instead, Jesus wants to pull us out, so He says, 'Come.' The way out is via relationship, in looking up to the One who truly loves us."

The alleged Marian apparitions in Medjugorje have been a source of controversy and conversion since their beginning, with many flocking to the city for pilgrimage and prayer, and some claiming to have experienced miracles at the site, while many others claim the visions are not credible.

The purported apparitions originally began on June 24, 1981, when six children in Medjugorje, a town in what is now Bosnia and Herzegovina, began to experience phenomena that they have claimed to be apparitions of the Blessed Virgin Mary.

According to the alleged visionaries, the apparitions conveyed a message of peace for the world, a call to conversion, prayer, and fasting, as well as certain secrets surrounding events to be fulfilled in the future.

These apparitions are said to have continued almost daily since their first occurrence, with three of the original six children â€" who are now young adults â€" continuing to receive apparitions every afternoon because not all of the "secrets" intended for them have been revealed.

In January 2014, a Vatican commission ended a nearly four-year-long investigation into the doctrinal and disciplinary aspects of the Medjugorje apparitions and submitted a document to the Congregation for the Doctrine of the Faith.

Pope Francis granted Catholics permission to organize pilgrimages to Medjugorje in 2019, though the Church has not yet given a verdict on the authenticity of the apparitions. The pope has sent annual messages to the Medjugorje Youth Festival since 2020.

"Dear young people, while you are resting in Jesus Christ during these days, I entrust you all to the Blessed Virgin Mary, our heavenly Mother, so that, through her intercession and with her example, you may take upon yourself the gentle and light yoke of following Christ," Pope Francis said in his message.

"May the gaze of God the Father who loves you personally accompany you every day, so that, in relationships with others, you can be witnesses of the peace that you will receive as a gift."