Will Pope Francis' health cause him to retire?

Free World Class Education
FREE Catholic Classes
Pope Francis has said he has no plans to resign soon and that his knee injury is healing.

Reports of Francis resigning began to spread last month in light of three events to happen in late August, including the creation of new cardinals and a day trip to the Italian city of L'Aquila, which Benedict XVI visited in 2009, four years before announcing his own resignation. 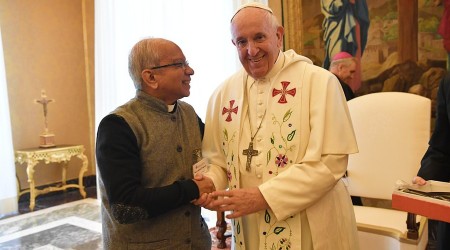 Pope Francis told Reuters in an interview published July 4 that "all of these coincidences made some think that the same 'liturgy' would happen. But it never entered my mind. For the moment no, for the moment, no. Really!"

The pope did say, as in the past, that he would consider resigning one day if he could no longer run the Church due to poor health, but only "God will say" when that might be.

The 90-minute interview with Reuters took place on July 2 in the Vatican's Santa Marta guesthouse, where Pope Francis lives. He frequently holds meetings in a reception room on the building's ground floor.

According to Reuters, the pope arrived for the interview using a cane.

He joked, "I'm still alive!" when asked how he was doing. He also explained that he had suffered "a small fracture" in his right knee after stepping wrongly with an inflamed ligament.

The fracture is healing, he said, with the help of laser and magnet therapy. "I am well, I am slowly getting better."

Pope Francis expressed regret that, due to the knee injury, he had to cancel a trip to the Democratic Republic of Congo and South Sudan, scheduled for July 2-7, saying the decision caused him "much suffering."

The decision came after doctors said he needs 20 more days of therapy and rest for his knee before he travels to Canada July 24-30.

The pope also brushed off rumors that he has cancer.

Some reports have claimed Francis is suffering from colon cancer after he underwent an operation to remove part of his large intestine due to diverticulitis one year ago.

"[The operation] was a great success," he told Reuters, adding with a laugh that "they didn't tell me anything" about the supposed cancer, which he dismissed as "court gossip."

He added that he does not want to have surgery on his knee because of the negative side-effects of general anesthetic.

He also spoke about the war in Ukraine and reiterated his desire to visit Kyiv and Moscow.

No pope has ever visited Moscow, but Francis hinted that there may now be an opening, even if Russian authorities told the Vatican several months ago it was not the right time.

"I would like to go [to Ukraine], and I wanted to go to Moscow first. We exchanged messages about this because I thought that if the Russian president gave me a small window to serve the cause of peace," he said.

"And now it is possible," he said, "after I come back from Canada, it is possible that I manage to go to Ukraine. The first thing is to go to Russia to try to help in some way, but I would like to go to both capitals."

The pope said Vatican Secretary of State Cardinal Pietro Parolin has been in contact with Russian Foreign Minister Sergei Lavrov about a possible trip to the Russian capital.