Official patrons of the 10th World Meeting of Families

Free World Class Education
FREE Catholic Classes
Relics of the first married couple to be beatified together by the Catholic Church can be venerated inside St. Peter's Basilica this week during the World Meeting of Families in Rome.

Blessed Luigi and Maria Beltrame Quattrocchi are the official patrons of the 10th World Meeting of Families taking place in Rome on June 22-26. 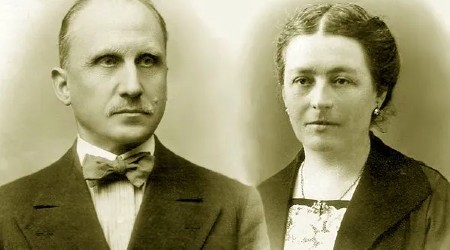 Blessed Luigi and Maria Beltrame Quattrocchi are the first married couple to be beatified together.

The Italian couple was married for 45 years, enduring two world wars together and nurturing their four children's vocations in service of the Church amid unprecedented difficulties facing Europe.

Both of their sons became priests in the 1930s and went on to concelebrate the beatification Mass of their parents with John Paul II in 2001.

Their eldest son, Father Tarcisio Beltrame, a Benedictine monk, and his younger brother Father Paolino, a Trappist, both risked their lives to secretly work with the resistance during the Nazi occupation of Italy in World War II, while the Beltrame Quattrocchi family's apartment in Rome served as a hiding place for fugitives and Italians with Jewish heritage.

A living relative of the Beltrame Quattrocchi family says that he has documents from the U.S. Office of Strategic Services (OSS) confirming the sons' collaboration in the Resistance movement, which was made even riskier by the fact that the family's apartment was located right by the headquarters of the German command in Rome.

"If they had been discovered they would have all been immediately shot," Francesco Beltrame Quattrocchi told EWTN.

The Beltrame Quattrocchis' daughters also enthusiastically served the Church. Their eldest daughter, Stefania, entered a Benedictine monastery as a nun in 1927. And the youngest child in their family, Enrichetta Beltrame Quattrocchi, was a lay consecrated woman who has been declared venerable.

At the root of their children's vocations and the courageous witness of the Beltrame Quattrocchi family during times of trial was the rich spiritual foundation within Luigi and Maria's marriage.

When St. John Paul II beatified Luigi and Maria in 2001, he said that the blessed married couple "lived an ordinary life in an extraordinary way."

"Among the joys and anxieties of a normal family, they knew how to live an extraordinarily rich spiritual life. At the center of their life was the daily Eucharist as well as devotion to the Virgin Mary, to whom they prayed every evening with the rosary," he said.

Luigi and Maria lived lives of heroic virtue together as spouses and parents. The couple was married in the Basilica of St. Mary Major on Nov. 25, 1905. Luigi was 25 years old and Maria was 21. A plaque commemorating their marriage can be seen in the basilica's Corsini chapel today.

After being married in Rome's largest Marian basilica, the couple later entrusted their family and all their children to Our Lady of Divine Love.

"This couple lived married love and service to life in the light of the Gospel and with great human intensity. With full responsibility they assumed the task of collaborating with God in procreation, dedicating themselves generously to their children, to teach them, guide them and direct them to discovering his plan of love," John Paul II said.

"From this fertile spiritual terrain sprang vocations to the priesthood and the consecrated life, which shows how, with their common roots in the spousal love of the Lord, marriage, and virginity may be closely connected and reciprocally enlightening."

Luigi worked as a lawyer and Maria served as a catechist and wrote several books on education while raising their four children.

During World War I, the family also assisted the wounded and families facing difficulties. They also financially supported some young people who wished to become priests or enter religious life.

Luigi died of a heart attack in 1951 at the age of 71. Maria lived for another 14 years after the death of her beloved husband and continued her dedicated service to her family and the Church.In addition to the first-class relics of the blessed married couple, which can be found in front of the main altar in St. Peter's Basilica, several other personal items of theirs will be on display in the Paul VI Hall during the World Meeting of Families in Rome.

The items showcase how the couple's spiritual lives were intertwined with the love shared in their marriage. On display is the engagement ring that Luigi gave to Maria and the Bible that the couple would read together.

There is also the small holy card of the Blessed Virgin of the Rosary of Pompei that Maria gave to Luigi before their wedding, which Luigi kept in his wallet for over 40 years.

The beatified couple are buried together in Rome's Sanctuary of Divine Love.