How many saints are there?

Free World Class Education
FREE Catholic Classes
The number of official saints is different from the number of actual saints.

How many Catholic saints are there? The answer may surprise you. 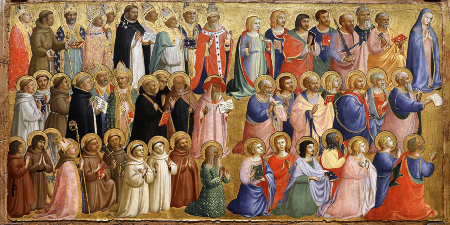 How many saints are there, really?

Keywords: saints, Catholic, church, how, many

LOS ANGELES, CA (California Network) - One of the fun questions we've got here at Catholic Online is, "How many saints are there?" Generally, the inquirer wants to know how many saints are recognized by the Catholic Church. This is a big question, with a big answer.

The short answer is, "more than 10,000." In fact, it is probably more than 11,000 by now. The commonly cited 10,000 figure is already a decade old, dating back to the end of Pope Benedict XVI's pontificate, and since then there's been some mass canonizations. Specifically, the 799 residents of Otranto, Italy, who were killed by the Ottomans in 1480, for refusing to convert to Islam.

A problem for the Church is there isn't an official, complete, comprehensive list of these 11,000 names. And in fact, not all the names exist. For example, there is really no way for the Church to know the identities of every person killed by the Ottomans in 1480. The Church knows they are saints because they gave their lives for the faith, but we do not know their names.

In addition, there are many saints who are more-or-less lost to time. Saints like Christopher, are actually historical figures who lived so long ago, there are no primary sources to verify their existence. Without the evidence to verify his existence, Christopher was struck from the universal calendar in 1969, because the Church was unable to determine his status.

You see, in the ancient world, many people became saints by virtue of broad acclaim. There existed no formal process whereby the Church recognized sainthood, so it probably worked more like a popularity contest. If people liked you, a lot, or the stories others told about you, you were considered a saint. In reality, some of these figures either never existed, were less than impeccable, or were even mashups of several popular people. There's just no way of knowing for sure.

Saint Christopher is one such individual. The name means "Christ bearer," and it's unlikely that was his real name, assuming he existed. That said, chances are he did exist, and we simply don't know his name. However, people of the ancient world knew him, or knew of him, and promoted his legend after his passing. But again, without records, we just cannot say for sure.

None of these facts matter however, to the actual number of saints in existence.

Only God can make a person a saint, by granting them eternal communion with him in heaven. That's what an actual saint is, in the strictest sense. (There is more than one meaning behind the word -- all Christians are saints in a very broad sense.) The number of souls in this state of being is unknown to us. However, if the Church claims to encounter a few saints per year (on average) these are simply the people who have passed the canonization process. That process requires one, or two miracles in your name, among other requirements.

To put it plainly, the Church does not make people saints, it simply recognizes people as saints.

The fact is, the actual number of saints could be in the literal millions, or even billions, depending on how God works to save human souls, which we assume to be quite diligently. However, in the meantime, the Catholic Church recognizes about 11,000 saints, and of that number there are certainly many whose names are unknown, and whose historicity is debatable.