Ask a room full of Biblical scholars to pinpoint the location where God gave Moses the Ten Commandments, and you will get an array of answers. The fact is, nobody is really sure. Except some scholars now think they have found the location, and they believe it's beyond dispute. The found the site by doing one thing differently from their predecessors. 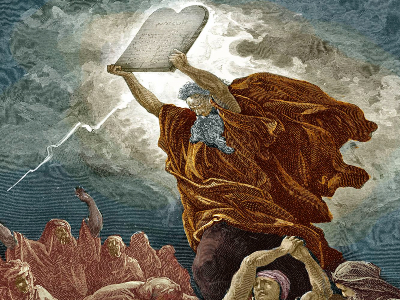 LOS ANGELES, CA (California Network) - The Book of Exodus tells us what happened when Moses crossed into the Sinai. God called Moses to Mount Sinai where He presented him with the Ten Commandments. Moses returned to the Israelites only to find them worshipping the golden calf. In his anger, Moses smashed the tablets, which were later remade. But where exactly did this happen?

Most historians have pointed to a range of mountains in the Sinai peninsula. More than one site is suggested as the place where this remarkable event took place. But each site has its problems, from a historical perspective. No one location seems to fit perfectly. Because scholars cannot agree on which mountain is supposed the be the original mountain where Moses received the Commandments, some have concluded the story of Exodus must be a myth.

To suggest Exodus is a myth is a leap of logic. To support the assertion, skeptics of the Bible argue there is a lack of physical evidence, and they point to disagreements among biblical scholars. However, this ignores the fact that physical evidence often fades and disappears within years to decades after a historic event. Yet, descriptions can remain, and in the case of the Bible, the mountain where Moses received the Commandments is described as a peak, scorched with fire.

To find the location, scholars from the Doubting Thomas Foundation did something none had done before, they looked further east. Although the Bible mentions the Sinai as the land where Moses and the Israelites wondered, it is quite possible that in their four decades of travels they moved further east than popularly thought. Their travels may have led them as far east as the northwestern corner of the Arabian Peninsula.

As if to confirm their theory, the researchers scoured the region and discovered a mountain with a blackened peak. Jabal Maqla perfectly fits the Biblical description. And it is close enough to the Sinai that ancient people would not likely have realized they were just to the east of the modern Sinai.

Perhaps more compelling, researchers soon discovered other tantalizing clues. Among them the existence of what appears to be an altar made of uncut stones at the base of the mountain. This also fits with the account in Exodus where it is said Moses built an altar.

There is a final, remarkable clue. Moses is said to have placed 12 pillars to represent the 12 tribes of Israel. Researchers report finding what appear to be the remnants of nine such pillars, along with bits of marble scattered in the area that suggest the location may have been used as a ceremonial center.

Are these coincidences? It's possible, but how likely is it to find a scorched mountain peak, evidence of an altar, marble pillars, and petroglyphs of people worshipping cows? The description fits the Biblical account almost perfectly, leading scholars to suggest this is the long-sought answer to the location of where Moses received the Commandments.