Pope's new encyclical - a roadmap to live as one human family

With so much of humanity sickened in soul and body by greed, self-centered indifference to suffering, inequality, polarization and violence, Pope Francis has wonderfully seized the moment by giving to our wounded world the balm of his new inspiring and challenging social encyclical letter titled Fratelli Tutti ("All Brothers: On Fraternity and Social Friendship"). 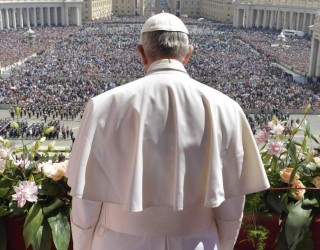 Pope Francis warns that humanity is largely going down the wrong road, and needs a radical transformative change of direction. He writes, "Just as I was writing this letter, the Covid-19 pandemic unexpectedly broke in and exposed our false securities. ... If anyone thinks it was just about making what we were already doing work better, or that the only message is that we need to improve existing systems and rules, they are denying reality."

Instead, the Holy Father is urging us to build a Gospel-centered fraternal global alternative that replaces our "throwaway culture" with the "culture of encounter."  Francis writes, "I very much desire that, in this time that we are given to live, recognizing the dignity of every human person, we can revive among all a worldwide aspiration to fraternity."

But he emphasizes that tremendous obstacles stand in the way of establishing universal brotherhood, and that we must have the faith and courage to overcome them.

Francis laments that "instances of a myopic, extremist, resentful and aggressive nationalism are on the rise."

The Holy Father warns against the widespread narrow-minded, unchristian notion that the territory beyond our village or country belongs to the "barbarian," and that whoever "comes from there cannot be trusted," and that new walls - including "walls in the heart" - must be erected for self-preservation against "them."

He adds, "People are no longer felt as a primary value to be respected and protected, especially if they are poor or disabled, if they are not needed yet - like the unborn - or no longer needed - like the elderly."

The pontiff notes a global "moral deterioration" and a "weakening of spiritual values and responsibility." As an example, the pope points to the unacceptable silence on the international level toward countless children "emaciated from poverty and hunger. ...Only when our economic and social system no longer produces even a single victim, a single person cast aside, will we be able to celebrate the feast of universal fraternity."

Reflecting on the enormous destructive power of modern weaponry - especially upon innocent civilians - Pope Francis declared: "We can no longer think of war as a solution, because its risks will probably always be greater than its supposed benefits. In view of this, it is very difficult nowadays to invoke the rational criteria elaborated in earlier centuries to speak of the possibility of a 'just war.' Never again war!"

This authoritative papal teaching is a significant step in moving the Catholic Church away from the just-war theory and back to its original Gospel-centered, Christ-like teaching of total nonviolence.

Pope Francis prophetically urges us not to slip back into the old significantly sick "normal" but instead to have the faith and courage to build a better world saying: "The pain, uncertainty and fear, and the realization of our own limitations, brought on by the pandemic have only made it all the more urgent that we rethink our styles of life, our relationships, the organization of our societies and, above all, the meaning of our existence."