'The crucifix is not just a symbol': Pope Francis' powerful message

The crucifix is not just a symbol or wall decoration, it is the entire expression of the love of God, who sent his Son to die for us and for our sins, Pope Francis said at Mass Wednesday. 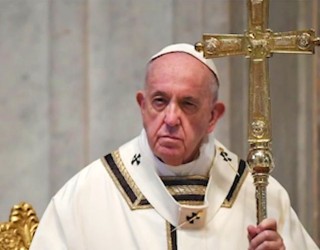 People "find everything there, because they understood, the Holy Spirit made them understand that there is all knowledge, all the love of God, all Christian wisdom there."

Emphasizing that a crucifix is not just a decorative object to hang on the wall, Francis urged Christians to "look at the crucifix in silence, look at the wounds, look at the heart of Jesus, look at the whole: Christ crucified, the Son of God, annihilated, humiliated... for love."

In his homily, Pope Francis reflected on the day's Gospel passage, John 3:16-21, pointing out that "there is everything here."

"Kerygma, catechesis, theological reflection, parenesis [exhortation]... there is everything in this chapter," he stated. "And every time we read it, we encounter more wealth, more explanations, more things that make us understand the revelation of God."

In this passage, Jesus tells the pharisee Nicodemus, "God so loved the world that he gave his only-begotten Son, so that everyone who believes in him might not perish, but might have eternal life."

The pope said the first point he wanted to make in his homily is that Christ's death on the cross for our salvation shows the "madness" of God's love for his children.

"Whenever we look at the crucifix, we find this love."

Pope Francis also highlighted Jesus' line in the Gospel about the people who "preferred darkness to light, because their works were evil."

"For everyone who does wicked things hates the light and does not come toward the light, so that his works might not be exposed," Jesus tells Nicodemus.

"There are people -- us too, many times -- who cannot live in the light because they are used to darkness," Francis said.

Calling these people "human bats," he said they are blinded by the light and only know how to move at night.

"And we too, when we are in sin, are in this state: we do not tolerate light. It is more comfortable for us to live in darkness; the light smacks us, shows us what we don't want to see," he stated.

The pope warned that the "eyes of the soul" get used to living in this darkness and lose all their sense of what the light is.

This state is clearly visible in the scandal and corruption of the world, he said, but "we too, when we are in a state of sin, in a state of estrangement from the Lord, we become blind and feel better in the darkness and go like this, without seeing, like the blind, moving as we can."

Before the start of Mass, he prayed for Europe, noting that unity is needed among nations right now and asking that Europe will have the "fraternal unity the founding fathers of the European Union dreamed of."

Pope Francis' prayer for Europe followed a day after he held a 45-minute phone conversation with French president Emmanuel Macron.

According to Macron's office, during the April 21 call the pope and Macron were in agreement on several issues regarding the COVID-19 pandemic response, including wanting to see unified action from the European Union.