President Trump to make announcement on prayer in public schools

President Trump is expected to announce new protections for students who wish to pray in school. Schools that violate religious freedom could lose federal funding. An announcement is expected today. 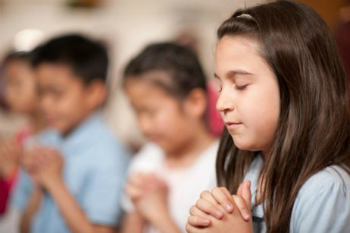 As the law is understood, school employees cannot initiate prayer or religious observances. However, students are free to do so. When they do, their right to pray must not be infringed. Of course, students are still expected to be attentive during class and non-disruptive, but this hasn't been an issue with student led prayer.

However, some school districts have banned students from delivering invocations or praying during ceremonies and events. There is some hostility towards prayer in schools. Generally, schools which facilitate student prayer fear being sued by atheists and others who claim they are being excluded or discriminated against.

Religious expression is protected by the First Amendment.

President Trump will be sending a letter via the Department of Education to all education secretaries and officials, reminding them that teachers and students cannot be discriminated against for exercising their First Amendment rights.

It is unclear if this stern reminder from the administration will impact anything, however it is an important message of support from the Oval Office that America is a nation built upon religious freedom and all are welcome to worship as they will, including in public spaces.