Education is "ground zero" in the fight for religious freedom, the U.S. Attorney General told an audience at the Notre Dame Law School on Friday. 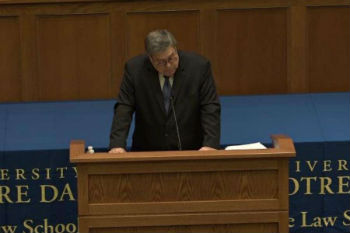 South Bend, Ind., (CNA) - Education is "ground zero" in the fight for religious freedom, the U.S. Attorney General told an audience at the Notre Dame Law School on Friday.

While speaking on the threats posed to freedom of religion in the U.S. by aggressive secularism, Attorney General William Barr told law students that nowhere is the threat to religious freedom so great as in education.

Education, he said, should lead students to the truth and teach them to "love the truth" and to develop the "discipline to live by it." However, he added, "the times are hostile to this."

Barr addressed law students at Notre Dame on religious freedom Oct. 11, while a crowd of protesters had gathered outside the law school reportedly blowing whistles and holding signs that included asking the Trump administration to end the practice of separations of immigrant families at the border.

The protest of blowing whistles was in reference to a whistleblower complaint that President Donald Trump, on an official phone call with the Ukrainian president, had offered Barr's services to help investigate the son of opposing presidential candidate Joe Biden and his business dealings in the Ukraine.

He recently drew criticism for his decision to resume federal executions of some prisoners on death row, after Pope Francis had declared the death penalty "inadmissible" in 2018 and the U.S. bishops had long pushed for its abolition.

In his Friday remarks, Barr warned of a rise in secularism that is intent upon the "organized destruction" of the Judeo-Christian ethic, which he said the U.S. was founded upon.

This secular effort, he said, marshals the resources of academia and the entertainment and communications industries to promote a vision of life and morality that is fundamentally at odds with Christianity; it uses social ostracization, lawsuits, and other threats to push compliance, and even functions as a religion of sorts, he said.

Education, Barr said, is "ground zero" in this fight where secularism seeks to impose itself on the populace even in violation of religious freedom.

Public school curricula are being pushed by states and local boards of education that are "incompatible with Judeo-Christian principles," he said, with no opt-outs being offered to parents with religious objections. Barr referenced the states of Illinois, California, New Jersey and Colorado which require by law that public schools teach "LGBT history."

The right of parents to transmit faith to their children is paramount, he said, and "for the government to interfere in that process is a monstrous invasion of religious liberty."

For instance, the New Jersey law was passed without any opt-out for parents when the policy takes effect in middle and high schools in 2020-2021.

The Orange County Department of Education in California issued a memo in 2018 stating that parents who objected to comprehensive sexual education could not withdraw their children from instruction on gender, gender identity, gender expression, and sexual orientation.

These cases are part of an effort of the "state requiring local public schools to insert themselves into contentious social debates without regard to the religious views of their students or parents," Barr said. "Those families are implicitly told that they should conform or leave."

In other cases, religious schools are being singled out and marginalized simply because of their religious status when they are being considered for public benefits, he said.

Long-standing laws such as Blaine Amendment statutes - once passed in many states as anti-Catholic measures - are now being used to "starve religious schools of generally available funds" such as tax credits to help underprivileged students attend the school of their choice, Barr said, pointing to a Montana case, currently before the Supreme Court in Espinoza v. Montana Department of Revenue.

In Indiana, a lawsuit brought by a former teacher at Cathedral Catholic High School is challenging the authority of the Archbishop of Indianapolis to determine the Catholic identity of a school in his archdiocese, Barr said, saying that the situation painted " a disturbing picture."

Barr encouraged Catholics to "do all we can to promote and support authentic Catholic education at all levels," while promising that the Department of Justice would "fight" for religious freedom, "the most cherished of all American liberties."

In 2018, a religious liberty task force was created at the Department of Justice to implement a 2017 religious liberty executive order. Barr said that the task force involves the Solicitor General, the Office of Legal Counsel and others to meet regularly and discuss cases where the Establishment Clause is misapplied or abused by states against people of faith, or where the free exercise of religion is being violated.

In his remarks on Friday, Barr blamed the "erosion" of traditional morality for the subsequent rise in secularism that now threatens religious freedom, and represents a break with the founding values which underpin the American constitutional order.

The Constitution, he said, was created for people who could govern themselves and practice "moral discipline," but in the last several decades there has been a decline in the common understanding and adaptation of Judeo-Christian principles and adherence to the natural law.

"The campaign to destroy the traditional moral order," he said, "I believe has brought with it immense suffering and misery," Barr said, while noting that the rise of secularism had come with an attack on organized religion brought with "force, fervor, and comprehensiveness."