The University of Notre Dame announced Sunday that Vicki Thorn will receive the 2020 Notre Dame Evangelium Vitae Medal in recognition of her pro-life efforts. 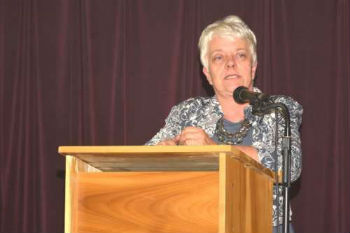 Thorn, founder of Project Rachel and executive director of the National Office of Post-Abortion Reconciliation and Healing, will receive the award at an April 25, 2020 banquet and Mass.

The de Nicola Center for Ethics and Culture presents the award annually to champions of the pro-life movement. The winner receives a $10,000 prize and a specially commissioned medal.

"Vicki Thorn has dedicated her life to caring for women and men who have been wounded by abortion," O. Carter Snead, director of the de Nicola Center for Ethics and Culture, said Oct. 6.

"Her work is a living witness to the unconditional love and mercy that lies at the heart of the Culture of Life. We are pleased to honor her with the Notre Dame Evangelium Vitae Medal," he said.

In 1984, Thorn founded Project Rachel as a response to the psychological and emotional traumas which often follow abortion. Overseen by the United States bishops conference, it is now an active ministry in at least 165 dioceses throughout the U.S. It also functions in 25 other countries.

According to the Rachel Project website, the loss of a child by abortion can produce such effects as insomnia, depression, low self-esteem, and substance abuse. These effects occur in some women immediately, but more commonly they occur over the following 5-12 years after a terminated pregnancy.

Post-abortion syndrome is very common, the website states, but the negative effects of abortion are broadly ignored among the public. "Consequently, many women think that their grief reactions are somehow abnormal and believe that there is nowhere to turn for help," the website says.

The project offers those struggling from post-abortion trauma with a network of informational, medical, and spiritual resources. Under the program, beneficiaries will have access to mental health professionals, spiritual directors, educational material, and intercessory groups. The goal of the project is to provide these women with forgiveness, healing, and hope.

"Vicki Thorn's work has been a source of healing for women and men whose lives have been touched by abortion," said Father John Jenkins, the president of Notre Dame.

"I'm grateful to the de Nicola Center for Ethics and Culture for recognizing Ms. Thorn for her service to the Church and to the work of mercy on behalf of a Culture of Life," he said.

In 2008, Thorn and her husband William were inducted into the Pontifical Equestrian Order of the Holy Sepulchre of Jerusalem. Thorn was also given the People of Life Award in 2009 from the U.S. Conference of Catholic Bishops.

"She has helped thousands of women who have had an abortion to accept St. John Paul II's invitation in Evangelium Vitae to 'not give in to discouragement and not lose hope.' Project Rachel reminds us all that the Gospel of Jesus, the Gospel of life, is also the Gospel of mercy. I offer sincere thanks to Vicki especially for assisting so many women and men to experience God's love and forgiveness and to become, in the words of St. John Paul II, 'eloquent defenders of the right to life,'" he said.

The medal is named after St. John Paul II's 1995 encyclical Evangelium vitae. In past, the medal has been awarded to Mother Agnes Mary Donovan and the Sisters of Life, Supreme Knight Carl Anderson and the Knights of Columbus, and Congressman Chris Smith - co-chair of the Bipartisan Congressional Pro-Life Caucus.

"Vicki represents the kind of creative, brave, kind, tenacious woman who keeps the movement strong," said Alvare. "She puts the 'respect' in the 'Respect Life' brand."

"Vicki not only championed the cause of post-abortion reconciliation and healing, she has lived to see it become an essential aspect of the Catholic Church's pro-life ministry in the United States and around the world," said Doerflinger.

"Far from resting on her laurels, she is now a leader in showing how the Church's vision of human sexuality is supported by the findings of medical science, helping young people to turn away from behaviors that lead to the tragedy of abortion," he added.