The Holy See's Secretary of State has cautioned world leaders against the "ideological colonization" of developing nations. Cardinal Pietro Parolin issued the warning Tuesday at the 74th session of the United Nations General Assembly in New York. 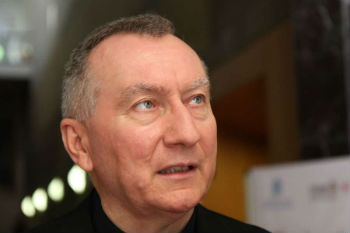 "I would like to stress that partnership for sustainable and integral human development means moving together in the same direction. It means steering away from the tendency toward ideological colonization and from imposing the will of a few on the many," said Parolin,who is in New York to lead the Holy See's delegation to the UN General Assembly.

Cardinal Parolin delivered his statement at the plenary session of the 2019 High-Level Political Forum on Sustainable Development on Sept. 24.

Pope Francis has previously used the term "ideological colonization" to describe international efforts to pressure developing countries to conform to liberal Western laws and values on family issues, including the acceptance of so-called gender theory, support for same-sex marriage and the admission of abortion.

In his September, 2015, address to the UN General Assembly, Francis said that the "recognition of certain incontestable natural ethical limits" and the "implementation of those pillars of integral human development" are necessary to true peace and development.

Without these, the pope said, the goals of peace and development would devolve into "idle chatter" which simply whitewashes "corruption" or "carrying out an ideological colonization by the imposition of anomalous models and lifestyles which are alien to people's identity and, in the end, irresponsible."

In a Nov. 21, 2017 homily at the Casa Santa Marta, Pope Francis condemned "ideological colonization" as "blasphemy," noting that "it was [once] a sin to kill children," but now "it is not a problem, it is a perverse novelty." This colonization "wants to change Creation as it was made by (God)," he said.

In his 2015 visit to the Philippines, the pope also warned of "an ideological colonization we have to be careful of that tries to destroy the family." A Vatican official later clarified that his reference included the imposition of same-sex marriage on countries.

In an in-flight press conference following the visit, Pope Francis explained his reference by giving an example of a loan for the building of schools for the poor in a certain country, on the condition that those schools used books teaching gender theory.

On Tuesday, Cardinal Parolin was addressing the issue in relation to the UN's 2030 Agenda for Sustainable Development, which he said "commits the international community to eradicate poverty in all its forms and dimensions and to ensure that all women, men and children have the conditions necessary to live in freedom and dignity."

The Agenda states, among other goals, an international commitment "to ensuring universal access to sexual and reproductive health-care services, including for family planning, information and education."

The cardinal reaffirmed the Holy See's reservations about such language as previously expressed in documents from the 1995 World Conference on Women in Beijing and the 1994 Cairo Conference on Population and Development, that they not be interpreted to push for abortion access.

"In particular, the Holy See rejects the interpretation that considers abortion or access to abortion, sex-selective abortion, abortion of fetuses diagnosed with health challenges, maternal surrogacy, and sterilization as dimensions of these terms, or of universal health coverage," Cardinal Parolin said.

On Tuesday, Parolin said that promotion of development requires countries, donors, and development programs to work in "solidarity," he said, in "a global, integral, whole-of-society approach."

Public officials, he said, bear a "special responsibility" to protect the "most vulnerable" and ensure "a dignified and just development" involving the whole of civil society.

Parolin said that there must be improved data gathering on-the-ground by countries and civil societies, to deliver a more accurate picture of the situation faced by those in poverty.

Development efforts cannot only help the "visible" poor, Parolin said, while leaving others out: those "caught in situations of conflict and violence," people "living extreme poverty and isolation in the remotest places," and "those living the scourge of modern slavery."