The German bishops are pressing forward with a controversial synodal program, creating a new Synodal Assembly in partnership with an influential German lay group. The decision to proceed comes despite a warning from Pope Francis to the German bishops that they must remain in step with the whole Church. 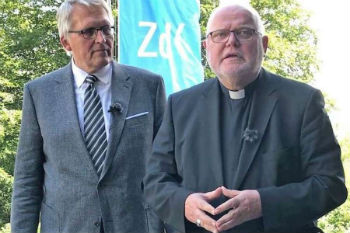 Berlin, Germany, (CNA) - The German bishops are pressing forward with a controversial synodal program, creating a new Synodal Assembly in partnership with an influential German lay group. The decision to proceed comes despite a warning from Pope Francis to the German bishops that they must remain in step with the whole Church.

In March of this year, Cardinal Reinhard Marx, Archbishop of Munich and Freising and head of the German bishops' conference, announced that the Church in Germany would embark on a "binding synodal process" to tackle what he called the "key issues" arising from the clerical abuse crisis: clerical celibacy, the Church's teaching on sexual morality, and a reduction of clerical power.

In line with a draft document under development by the German bishops' conference, which was presented at a meeting of the conference's permanent council in August, the Church in Germany will proceed to form a new "Synodal Assembly" to address these issues. While the preamble of the statutes is still being drafted and a vote will need to be taken on the entire final text, the conference executive is proceeding in the synodal process with "absolute certainty," sources close to the German leadership told CNA.

CNA has obtained a copy of the draft statues.

The text would create a "Synodal Way of the Catholic Church in Germany" which "aims to address and clarify key issues such as: 'authority and separation of powers,' 'sexual morality,' 'the priestly mode of life,' 'women at the service of ecclesiastical offices' over a two-year period.

The Synodal Assembly would be given the authority to pass resolutions in the name of the Church in Germany. The assembly will have up to 200 members, with the largest block, 70, coming from the Central Committee of German Catholics (ZdK).

German priests, religious, deacons, pastoral workers and other lay groups will also be represented. The 69 bishops who form the German bishops' conference will be a minority of the membership. Each member - whether a bishop, a priest, or a layperson - will possess a single vote.

Article 3 of the draft statutes provides that:

The statutes also provide that resolutions "do not affect the power of the episcopal conference and of individual diocesan bishops, in the context of their own areas of competence, to issue normative acts and to exercise their proper magisterium."

Article 11 of the draft statutes provides that "Resolutions that concern issues reserved for control by the Universal Church will be further transmitted to the Apostolic See."

In June, Pope Francis issued a letter to the entire Church in Germany, warning the bishops against "plans and mechanisms" which could prove "anything but helpful for a common path" for the Church. The pope said that any "synodal path" would need to be the subject of careful reflection.

"What it means concretely and how it develops will certainly have to be considered even more deeply," the pope wrote, reminding the Germans that synodality "means going out together with the whole Church under the light of the Holy Spirit."

Francis warned that "the synodal perspective does not resolve opposites or confusions, nor does it subordinate conflicts to the decisions of a'good consensus' that compromise faith, to the results of censuses or surveys relating to this or that subject."

Despite the pope's call for a deeper reflection on synodal mechanisms and a focus on faithful evangelization, senior sources in the German bishops' conference told CNA that the conference is now in the final stages of completing the governing document.

The new Synodal Assembly would be presided over by Cardinal Marx, as the president of the German bishops' conference, and Dr. Thomas Sternberg, the current president of ZdK. Each document and subject area will be treated by a smaller group, a "Synodal Forum," membership of which  is determined by the co-presidents.

A completed version of the statutes for the Synodal Assembly has yet to be released.

Nevertheless, Sternberg and Marx have confirmed on the ZdK website that the Forum groups for three of the four subject areas have already been constituted and begun their work:

"The first three forums have already started work," according to a July 5 quote jointly attributed to Marx and Sternberg from July 5, in the days immediately following the pope's letter to the German leadership and faithful.

The membership of working groups assigned to develop resolutions on "separation of powers," sexual morality, priestly life, and the role of women in the offices and ministries of the Church, is also published on the website of ZdK.

"The aim of this forum work is to deliver the first interim results in the autumn, in order to prepare the actual synodal way. Our joint timetable states that we want to decide on the exact form of the Synodal Path in September and November at the respective assemblies of the German Bishops' Conference and ZdK."

The release of the interim reports is expected to coincide with the meeting of the Synod on the Amazon in Rome, in which members of the German hierarchy have taken a close interest and played an influential role in drafting the preparatory documents.

While the Amazonian meeting is intended to deal with a range of pastoral issues concerning the region, including environmental concerns, much focus has been placed on the proposal to permit a limited exception to priestly celibacy in the region by ordaining so-called viri probati, or married laymen deemed to be a proven worth.

"This is obvious," Bode said at the time. The bishop said that "pastoral emergency" in OsnabrĂĽck, his diocese, and other German dioceses, is "different but also very severe."

Bishop Franz-Josef Overbeck of Essen, who also serves as president of Adveniat, the Church in Germany's aid organization for Latin America, has called the Amazonian synod "a point of no return" for the Church and that "nothing will be the same as it was" after the synod.

Pope Francis has instructed the German bishops that they must proceed in communion with the universal Church. The statutes for the Synodal Assembly make clear that the bishops intend to pass binding resolutions on matters touching universal Church teaching.

Recent statements from the ZdK indicate an expectation that the Synodal Assembly will become the principal forum for debating, and deciding, ecclesial issues in Germany.

The ZdK's 2019 Plenary Assembly concluded that its agreement to participate in the Synodal Assembly was conditioned on a guarantee from the German bishops that synodal resolutions would be binding.

"The ZdK will actively and constructively contribute, as long as the openness of the deliberations and the bindingness of the resolutions are guaranteed by the partners involved in the'Synodal Way'."

ZdK Vice-President Wolfgang Klose, who would have a senior organising role in the Synodal Assembly's presidency, told the Central Committee's membership in May that the Synodal Assembly can and would treat issues of universal Church teaching and discipline.

"It is not right to use the level of the global Church as an excuse not to comprehensively face concrete problems on the ground," he told members as he recommended ZdK participation in the Synodal Assembly.

"This must not become a self-serving attempt to justify [the Church's] behaviour. Rather, it is the universal Church that is realized in the local churches; she lives from the impulses of those people who strive to present the Gospel of Jesus in their concrete situations."

CNA spoke to several officials in different curial departments in Rome, all of whom said that the statutes for the Synodal Assembly have not yet been submitted to Vatican authorities for consultation or approval.

On Sept. 4, Cardinal Rainer Maria Woelki of Koln told his diocesan newspaper that he has concerns about the plans for the "binding synodal process," noting widespread anxiety that the plans would fracture the relationship between the global Church and the German hierarchy.

Many Catholics, the cardinal said, fear "that we even risk the community with the universal Church and will become a German national church."

Marx told reporters in July that "No German bishop, no member of the ZdK wants to leave the universal church, which is not an issue at all."

"Reading the signs of the times in the light of the Gospel, that's what matters," Marx said.