That the working document for October's Synod of Bishops calls the Amazon region a source of revelation is a "false teaching," Cardinal Gerhard Mueller said Tuesday. 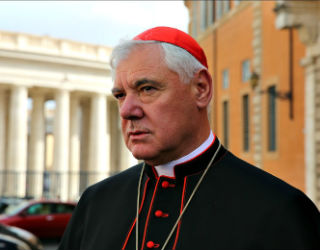 'Theology is "the understanding of God's revelation in His Word.'

Vatican City, Jul 16, 2019 / 08:27 am (CNA) - If in the Instrumentum laboris of the Amazon synod, "a certain territory is being declared to be a 'particular source of God's Revelation,' then one has to state that this is a false teaching," the German cardinal said.

"For 2,000 years, the Catholic Church has infallibly taught that Holy Scripture and Apostolic Tradition are the only sources of Revelation and that no further Revelation can be added in the course of history," he clarified.

Mueller's analysis was simultaneously provided to CNA's sister agency CNA Deutsch and several other news outlets, July 16. The working document for the special assembly of the Synod of Bishops for the Pan-Amazonian region, which will take place in October, was published June 17.

In his seven-page response, Mueller said he believes in the goodwill and intention to promote the Catholic faith of those who prepared the Instrumentum laboris, but underlined what he sees as weaknesses in both form and content.

He referenced paragraph 19 of the document, which says the Amazon, or another indigenous territory, is not only a geographical space, but "a quid or a what, a place of meaning for faith or the experience of God in history."

"Thus," the paragraph continues, "territory is a theological place where faith is lived, and also a particular source of God's revelation: epiphanic places where the reserve of life and wisdom for the planet is manifest, a life and wisdom that speaks of God."

Mueller compared this comment to what it says in Dei Verbum, Vatican II's dogmatic constitution on divine revelation, that "we now await no further new public revelation." He added that "Holy Scripture and Tradition are the only sources of Revelation."

The cardinal said his main concern with the document is what he sees as an ambivalence in the definition of key terms and their general overuse. He lists, as examples, integral development, synodal path, and a Church reaching out.

Mueller also criticized the document's reference to "Theologia indigena and the eco-theology."

Theology is "the understanding of God's revelation in His Word and in the Faith-Profession of the Church," he said, not the "continuously new mixture of world feelings and world views..."

The Church should not, he argued, abandon the knowledge of classical and modern philosophy, of the Church Fathers, of modern theology, and of the Church Councils for the "Amazonian cosmovision."

On the idea of inculturation of the liturgy in particular, Mueller warned of the importance of sacramental integrity. Inculturation can help "ingrain in culture the Sacraments," but the sacramental signs themselves cannot be changed, he said. "That would not be inculturation, but an inadmissible interference with the will of Jesus as founder of the Church."

Mueller said he believes every Catholic will agree with the pre-synod document's desire for the men and women of the Amazon to not remain the object of colonialism and neo-colonialism.

"It is clear in Church, society, and state," he said, "that the people who are living there -- especially our Catholic brothers and sisters -- are equal and free agents in their lives and work, their Faith and their morality, and this in our common responsibility before God."

What he believes the Instrumentum laboris is missing, however, is "a clear witness to the self-communication of God in the verbum incarnatum, to the sacramentality of the Church, to the Sacraments as objective means of Grace instead of mere self-referential symbols..."

That "the integrity of man does not only consist of the unity with a bio-nature, but in the Divine Sonship and in the grace-filled communion with the Holy Trinity," he explained, "not only with the environment and our shared world."

"Due to the substantial unity of body and soul, man stands at the intersection of the fabric of spirit and matter," he explained. "But the contemplation of the cosmos is only the occasion for the glorification of God and His wonderful work in nature and history. The cosmos, however, is not to be adored like God, but only the Creator Himself."

"Instead of presenting an ambiguous approach with a vague religiosity and the futile attempt to turn Christianity into a science of salvation by sacralizing the cosmos and the biodiverse nature and ecology, it is about looking to the center and origin of our Faith," he said, the Incarnation.