Speaking about St. Pope John XXIII's encyclical on establishing universal peace, Pacem in terris, Pope Francis said that even 55 years after its publication, the document still stands as 'a permanent commitment" to peace. 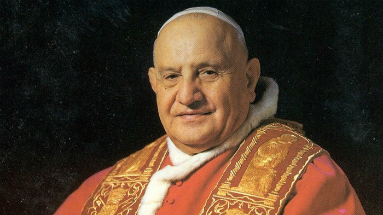 Vatican City (CNA/EWTN News) - Even if the way war is carried out has changed since the time when the encyclical was written, and today there appears to be more violence and conflict than in the past, St. John XXIII's reflections "remain valid," he said.

In an interview published May 24 in "L'Eco di Bergamo," a newspaper of the northern Italian town of Bergamo, Francis said he is concerned about the ways violence occurs, not only with weapons, but with â€˝mechanisms of oppression."

Imbalances linked to the "reckless exploitation of men and of the resources of nature" are a cause for concern today, he continued, underlining that peace cannot only 'be linked to the absence of war," but must involve the "integral development of people and populations."

The job of the Church is not to "make governments change," he said, but to bring the 'logic of the Gospel into the thinking and gestures" of those who govern.

It must be understood that 'the commitment for social groups and states is to live relationships of justice and solidarity that cannot be just words." Instead, 'every form of selfishness, individualism, group interest" must be overcome at all levels of society.

The pope granted the interview for the occasion of a visit of St. John XXIII's remains to the Diocese of Bergamo.

Exposed for veneration at an altar inside St. Peter's Basilica, the saint's body has returned to his home diocese May 24-June 10 to mark the 55th anniversary of his death and the publication of the encyclical Pacem in Terris.

This visit is "a gift and an occasion" for a new journey of faith, the pope said. Especially for the elderly, poor, and sick, or anyone else who may not be able to visit St. Peter's Basilica to venerate the saint.

St. John XXIII, he said, was 'a man, a saint who did not know a contrary word, who did not like words like crusades or proselytism and who instead always sought what unites, who trusted in God and in man in his image."

The 'Good Pope,' Francis said, believed that the Church is called to serve all people, 'not only Catholics," and to â€˝defend above all and everywhere the rights of the human person...aware that the pope must build bridges."

St. John XXIII also invites people 'to look at what really matters," he said, noting how his predecessor would keep a crucifix hanging opposite his bed so that it was the first thing he would see when he woke in the mornings.

The saint knew that 'Christianity is not an ideal to follow, a philosophy to adhere to or a moral to be applied," but 'an encounter with Jesus Christ that makes us recognize in the flesh of brothers and sisters his very presence," Pope Francis stated, encouraging people to serve the poor and sick --anyone who cannot give anything in return.

The story of St. John XXIII is filled with examples of "these gestures of closeness" with people who suffered, whether they were Catholics, Orthodox, or Jews, he said.