As people of faith, we have reasons to be grateful this year on President's Day 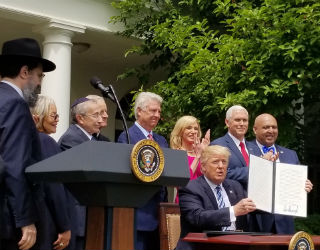 Priests for Life's Alveda King, second from left, watches as President Trump signs an executive order on religious liberty in May 2017.

President's Day is celebrated in the United States of America on the third Monday of every February. What started out as a celebration of the birthday of America's first president, George Washington, soon included President Lincoln's birthday. Eventually it became a celebration of every American president past and present.

The United States has a unique history and government that other countries have sought to emulate.  After the Revolutionary War, the colonists gained independence from the monarchy and abuses of King George III.  Americans wanted to make sure we would never have tyrants with absolute power ruling over the people again. The Founding Fathers created a unique constitution that set up a government of three branches with checks and balances to ensure not one had total control. This government had a president, not a king, who would work at the service of the people and not the other way around.

The president is meant to ground us on the principles of a country founded on the fundamental rights outlined in the Constitution of the United States of America and in the Declaration of Independence. The right to life is the first and most fundamental of these rights.

As people of faith, we have reasons to be grateful this year on President's Day. Donald J Trump, has, in one year, done much to safeguard and reinstate religious freedom and the right to life, both of which were being decimated during the eight long years of the Obama administration. The most pro-abortion president in history appointed pro-abortion judges to federal courts, promoted abortion through his many deadly policies, and waged war on religious liberty through the infamous HHS mandate.

Then, after an historic election, President Trump changed the entire direction of the federal government. The first and greatest thing he did for the pro-life movement was to keep Hillary Clinton out of the White House! Then, right after his inauguration, he reinstated the Mexico City Policy that prevents international family planning funds from going to pro-abortion groups. Moreover, he became the first president to expand that policy to cover virtually all foreign aid.
What's more, he defunded the United Nations Population Fund so that no U.S. money will go to help China's tyrannical forced abortion program. He also signed legislation to allow states to divert taxpayer money away from the Planned Parenthood abortion business!

President Trump fulfilled a major campaign promise by naming pro-life judge Neil Gorsuch to be a Justice of the Supreme Court. He has appointed a record number of similarly minded appeals court judges.

The list goes on, but we also have to mention President Trump's efforts to protect religious liberty. Not only did he sign a historic Executive Order on religious freedom (and then gave his signature pen to Priests for Life's Alveda King), he revoked and rewrote the HHS mandate so that faith-based non-profit groups like Priests for Life will no longer be attacked by the government for practicing our faith.

This President's Day we have much to be thankful for. I believe our country's pendulum is moving back in the right direction towards our Founding Fathers' mission and vision for America.

As a practical way of observing this President's Day, I ask you to take a few simple actions:

a) Pray for President Trump, and let us know at www.PrayerIntentions.org that you are doing so.

b) Express to the President your gratitude for his pro-life actions. You can sign on to our letter to him here.

c) Be sure to keep informed of all the great things this President and his team are doing by going right to the source, www.WhiteHouse.gov, to see actions, press releases, and decisions that uphold our values, but that do not make it into the mainstream media!

d) Be politically active. Sign up with us at www.PoliticalResponsibility.com to help us elect more pro-life members of Congress, so as to strengthen President Trump's ability in the coming years to defend the fundamental principles of America!