Free World Class Education
FREE Catholic Classes
The Second Secret is probably the most detailed and accurate prophecy in history.

In 1917, Our Lady delivered a stunning prophecy to the three child visionaries at Fatima. Russia, she warned, would fall into "error" and spread this error around the world. She asked Russia to be consecrated to her Immaculate Heart. Was this prophecy fulfilled? 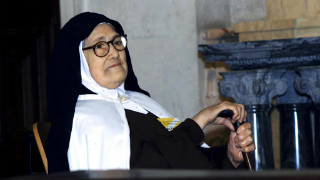 LOS ANGELES, CA (California Network) -- In 1917, the world was suffering through the tragedy of the First World War. At that time, Our Lady appeared to three young children in the Portuguese countryside. During her apparitions, she delivered three prophecies.

The second prophecy concerned current and future events of a precise nature. It remains one of the most detailed and accurate prophecies ever given to humanity. Our Lady, in what is now known as the "second secret of Fatima," predicted Russia would become a communist state and would work to spread her "errors" around the world.

One way to save the world was to consecrate Russia to the Immaculate Heart of Mary. Only in this way would her evils be stopped and peace return.

Several Popes performed ceremonies with the intent of consecrating Russia to the world, including Popes Pius XII, Paul VI, and John Paul II. For several decades, the Soviet Union persisted as an atheistic state, seeking to export its strain of government and its weapons around the globe. The world cowered in fear of its nuclear arsenal. In the Soviet Union, Christians were persecuted.

But in 1991, everything changed. The changes were set in motion years earlier, as a reformer premier, Mikhail Gorbachev introduced reforms to the Soviet States. The United States was declared the winner of the Cold War. The Berlin Wall came down, then Poland asserted its independence and embraced democracy. In the summer of 1991, the Soviet government collapsed, and Russia became free. Religious freedom returned, and in the years following, churches were rebuilt and restored.

Was this the promise of Our Lady coming true? Only Sister Lucia could answer this question.

Sister Lucia was the only one of the visionaries to survive childhood. She remained in a convent all her life. She was interviewed many times by Church officials who had questions about the prophecies. One of the people who met her was Archbishop Tadeusz Kondrusiewicz, then from Moscow.

Sister Lucia, upon learning he was from Moscow, asked if it was true that he was an openly practicing archbishop in the city. He said yes, he was. Then she replied, "So it means the prophecy of Fatima is fulfilled."

Today, according to Archbishop Kondrusiewicz, who is now the Archbishop of Minsk, Belarus, every church in his country has a statue of Our Lady of Fatima.