Did you get the message? Pope Francis is tasking Catholics with the mission of ending world hunger by 2025 via a sustained campaign of 'Prayer and Action.' Unfortunately, there are a lot of Catholics who haven't yet answered the call. 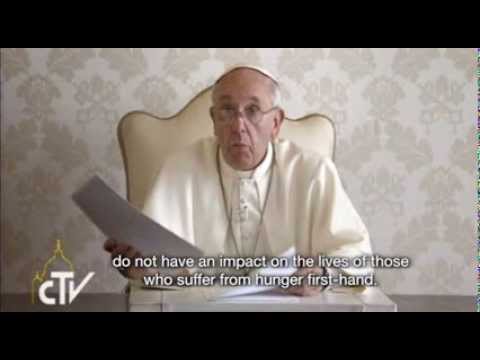 LOS ANGELES, CA (Catholic Online) - Millions of Catholics have answered the call to end world hunger by 2025, but millions more have done nothing. Almost as dismally, millions have donated just a few dollars expecting that to suffice.

Perhaps it's that most people do not appreciate the magnitude of the situation.

Hunger stalks at least one billion people, or about one in every 8 souls. The majority of those who go hungry are children, not adults. Children are also the most likely to suffer and die from malnutrition.

If you've never felt the pain of hunger, that's a blessing. However, for hundreds of millions of children, the burning, knotted sensation of a stomach that has been empty for perhaps two days or more is a reality they will always remember. For some, it is the last thing they remember before dying in a final bout of lethargy and pain. Starvation is real, it happens every day, and it's a terrible way to die.

Yet none of these children needs to die. The world produces more than enough food to feed everybody, but it is distributed scandalously. Pope Francis explained this in his call to action for all Catholics.


Think about yourself. What did you eat last? When's the last time you went hungry? How much food is wasted or thrown out in your home? How many leftovers in your fridge go uneaten?

For most Americans, the amount of food waste is staggering. America alone could feed the world with its refuse.

This is why you are called to be the ones to serve the hungry.

We are all called to serve the poor, but it is understood that we can't all take to the streets as Pope Francis did when he was a bishop. Instead, many of us have professional lives that require us to work at a desk and children to tend and so on.


We understand. Not everybody can "sell their desks and get into the streets" as Pope Francis told his almoner to do. But we can, in our own ways, make small sacrifices that have just as big an impact on the world.

If you can provide a meal for a hungry child, then you can say you've answered the call of Pope Francis to do your Catholic duty and feed the hungry.

"For you saw I was hungry and you gave me food."