Ignorance of Scriptures is ignorance of Christ, wrote St. Jerome in his Commentary on Isaiah.  And if what the Jewish poet Hayim Nahman Bialik said is true for Judaism is also true for Scripture (which we have no reason to doubt)--that knowing Judaism in translation is like kissing one's mother through a veil--then we encounter at least some impediment, though it be as thin as a veil, in being ignorant of the Greek and Hebrew of the Scriptures. 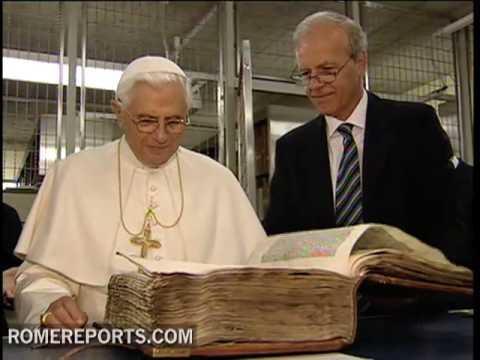 The justification for St. Isidore's claim was built upon Pilate's command--surely guided by divine Providence in St. Isidore's view--that the titulus crucis, the placard on the True Cross that identified Jesus' supposed crime, was to be written in Greek, Latin, and Hebrew: "Jesus of Nazareth, the King of the Jews." (John 19:19; cf. Luke 23:38; Matt. 27:37, 15:26)

In his poem "Apotheosis," the 4th century Christian poet Prudentius wrote about Pontius Pilate's stumbling into the truth that Jesus was, in fact, King of the Jews, and not only of the Jews, but of the entire Cosmos, the Pantokrator, as follows:

In ignorance, Pilate commands, "Go, scribe, and thrice
Inscribe the lines under which power hangs affixed,
Afront the cross, let the title be thrice, in three tongues
That by reading, Judaea may recognize, the Greeks know,
And golden and venerated Rome regard God."

To be sure, other religious traditions have their own sacred languages.  For example, the Muslims have the classical Arabic of the Qur'an.  The Hindus have their Sanskrit.  The Copts have their Coptic, and the Eastern Orthodox Churches their Slavonic.

But for the Roman Catholic, and really for all Christians of the West, the three sacred languages have been, are still, and forever must be, Hebrew, Greek, and Latin.

Yet St. Jerome's contemporary St. Augustine, while he had knowledge of Latin beyond criticism, admits in his Confessions that as a youth he disliked Greek, though retained some facility with it, and that his knowledge of Hebrew was such that he would not even recognize Genesis 1:1 if Moses himself read it to him in Hebrew.  Conf. I.13-14, XI.3  Also, we mustn't forget that St. Thomas Aquinas had virtually no knowledge of either Greek or Hebrew, and yet he is the common doctor of the Church, and his knowledge of the faith and his sanctity are both unimpeachable.

Goethe said that he who does not know foreign languages knows nothing of his own.  But this is not entirely true.  The critic Ben Johnson famously said of William Shakespeare that he had "small Latin and less Greek."  Hebrew goes unmentioned by Johnson, but we may be sure that Shakespeare's knowledge of Hebrew was less even than his Greek.  Shakespeare, we might hardly point out, got along quite famously without such knowledge, and knew his English quite well pace Goethe's observations.

So it is not necessary for salvation, or even necessary for literary ability, to know Latin, Greek, or Hebrew.  Nor is it necessary to travel to Rome or Jerusalem to be a saint.  Nevertheless, there is much value in having at least some familiarity with these three languages, or at least some of their words, just as there has always been value to going on pilgrimage to holy sites.  Exploring Hebrew, Greek, and Latin is analogous to going on an intellectual or conceptual pilgrimage.

Perhaps we can learn something about ourselves, or about Church, or about our Faith, or even about God by learning a little about Hebrew, Latin, and Greek.

The Old Testament, of course, is by and large written in Hebrew, although the 2nd century B.C. Greek translation of it known as the Septuagint--itself a Greek word worth exploring--is of venerable pedigree.  The New Testament comes to us in Greek, though it is full of Semitisms that one unfamiliar with Hebrew or Aramaic would be deaf to.  Obviously, knowledge of some Hebrew and Greek helps facilitate or develop intimacy with Scriptures.

Ignorance of Scriptures is ignorance of Christ, wrote St. Jerome in his Commentary on Isaiah.  And if what the Jewish poet Hayim Nahman Bialik said is true for Judaism is also true for Scripture (which we have no reason to doubt)--that knowing Judaism in translation is like kissing one's mother through a veil--then we encounter at least some impediment, though it be as thin as a veil, in being ignorant of the Greek and Hebrew of the Scriptures.

Though Latin is not a "scriptural" language in the strictest sense, the Latin Vulgate--the translation of the Bible by St. Jerome from Hebrew and Greek--is given great pride of place in the Roman Catholic Church, being regarded (by the Council of Trent) as "authentic," and of "probative force in questions of faith and morals."

Moreover, Latin is the liturgical language of the Roman rite, the common language of the Church, the inspiration and substance of Gregorian chant, and--along with, though to a lesser extent, Greek--is absolutely central in understanding Roman Catholic doctrine and theology.

In this series entitled Tres Linguae Sacrae, we will explore certain Hebrew, Greek, and Latin words or phrases that are scripturally, liturgically, or theologically important to Catholics.

There are, of course, Hebrew words that we still use in the Latin liturgy--Amen, Alleluia, Hosanna--or Greek words that remain as vestiges of a liturgy once prayed in Greek--Kyrie and eleison--which warrant exploration.

We will gaze at words that are virtually made up or cobbled together to describe things wholly new--such as the Greek kecharitomene in Luke 1:28--used of Mary and translated as "full of grace," or, controversially, "highly favored," or the mysterious epiousios--supersubstantial--which is found in the Lord's Prayer in Matthew 6:11 and Luke 11:3, and curiously translated rather mundanely: "Give us this day our daily (epiousion) bread."

We can expect to go over some Latin or Greek terms that are absolutely essential to understanding Catholic doctrine.  One thinks of the term transubstantiatio--which we transliterate into English as transubstantiation--or the word trinitas, given to us by the African Church Father Tertullian (which was invented by him) and is central to our faith: Trinity.

What about the Greek word hypostasis equivalent to the Latin word persona, essential for understanding both ourselves as persons, and the Trinity as three persons in one God?  Or what about those curious words which mean the same thing--circumincessio or perichoresis, in Latin and Greek respectively--which dare to speak about the mystery of mysteries: the relations of the persons within the Blessed Trinity.  How can man even utter words about such things so far above his ken and his experience?

Some of these words have extensive and intensive histories and involve subtle concepts that can make the difference between the heretic and the orthodox.  What a difference one letter makes--in this case the Greek letter iota or "i"--in a Creed!  What odium theologicum (theological "hatred") it engendered!

Yet how utterly important this iota was--with greater weight than any jot and tittle of the Hebrew Scripture--since it spelled the difference between Jesus being God, or being less than God, a difference of infinite proportion.  You go one way (without the iota) and you are Christian.  You go the other way (embrace the iota) and you deny Christ.  The Holy Spirit shunned the iota, though the Spirit worked hard to find the Church's champion and the Paraclete's mouthpiece: St. Athanasius.

Only the most crass and religiously obtuse--like the historian Edward Gibbon--would deride "the furious contests which the difference of a single diphthong excited," as if it mattered not whether Jesus was in fact God or merely God's superlative creature.

With our patrons in hand, let us go on a pilgrimage of words!