Behold Your Mother: Jesus Gives Us His Mother and Expands the Family Circle

Free World Class Education
FREE Catholic Classes
My mother and my brothers are those who hear the word of God and act on it.

Your mother and your brothers are standing outside and they wish to see you." He said to them in reply, "My mother and my brothers are those who hear the word of God and act on it.This biblical passage is sometimes misinterpreted. 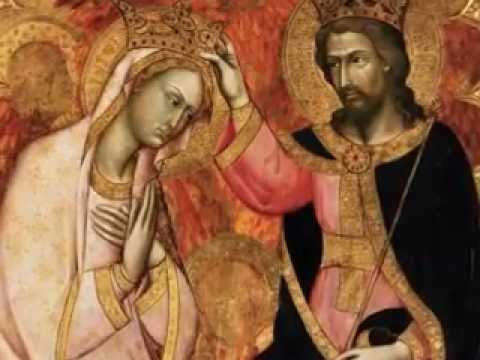 P>CHESAPEAKE, VA. (Catholic Online) - The Gospel reading for Holy Mass on Tuesday of the 25th week in Ordinary time is taken from St. Luke: "The mother of Jesus and his brothers came to him but were unable to join him because of the crowd. He was told, "Your mother and your brothers are standing outside and they wish to see you." He said to them in reply, "My mother and my brothers are those who hear the word of God and act on it."  (Luke 8:19-21)

This biblical passage is sometimes misinterpreted. Some claim that it stands for the proposition that Jesus intended to lessen the importance of his earthly mother and her role in the plan of salvation.  Such an interpretation is textually inaccurate and theologically mistaken. It runs contrary to the biblical context of the encounter and rejects the consistent, unbroken Christian tradition. Such a misreading ascribes a minimalist role to Mary in the Christian revelation and consequently in the life of every Christian.

It can also cause one to miss a profound truth concerning the Christian vocation. It can discourage one from digging deeper into the text and thereby grasping a deep, profoundly important insight. I stand with the Christian tradition, rooted in the patristic literature (writings of the early Church fathers), and subscribe to the exact opposite interpretation. What is actually revealed through these words and in this encounter is a framework for an authentically human and relational spirituality, a spirituality of communion.

This interchange was recorded for all time for a purpose. Through it, Jesus teaches us something about the interior meaning of our personal redemption, the redemption of the whole human race and the redemption of the entire created order. The message is simple but profound; God is a God of love and relationship. He has invited us into an intimate and eternal communion. Through our Baptism, we are all invited into the family of God. When we choose to be obedient to the will of God; we enter into an eternal relationship with God the Father, Son and Holy Spirit. We actually become "mother" sister" and "brother" to the Lord.

In His final act of Self-giving love, revealed for all eternity on Golgotha's Hill, Jesus also elevated and expanded the importance of His mother and "brothers". We read about this encounter in the Gospel of St. John. Picture the poignant scene, right before He was to breathe His last breath: "Standing by the cross of Jesus were his mother and his mother's sister, Mary the wife of Clopas, and Mary of Magdala. When Jesus saw his mother and the disciple there whom he loved, he said to his mother, "Woman, behold, your son."Then he said to the disciple, "Behold, your mother." And from that hour the disciple took her into his home." (John 19:26-27).

From antiquity, the Fathers of the Church have correctly and uniformly taught that this encounter was also about more than the relationship between the Apostle John (whom sacred scripture calls "the beloved disciple") and Mary the mother of the Lord. It was -and is- about the expanded family of the Church, the community that Jesus came to found - and of which He is the Head.

As a final gift, right before He died, He gave His mother to His whole family, through giving her to the beloved disciple John. This was a gift for all of us, an exchange, and an expansion of the family circle of relationship. In this exchange, the tradition has long taught, He also entrusted all of us to her maternal care. Jesus was not minimizing His relationship with His mother through these words given in response to the crowd, He was expanding it. He hungers, through Divine love, to include all of us in the "family circle" of God.

As with so many of the treasures of the Catholic faith, the treasure of Mary is a gift to be received. Moving from the acceptance of Mary as the Mother of the Lord to Mary as "my mother" requires the gift of faith. I am what is often called a 'revert" to the Church. Though raised as a Catholic, I fell away from the practice of the ancient faith. My teenage search for truth finally led me home. The route was circuitous. Among the places it led was reading the Fathers (early Bishops and teachers) of the first centuries of the Church. In ancient Christian writings I discovered how the early Christians viewed their participation in the Church as integral to their belonging to Jesus Christ. The Church is fundamentally relational.

After intensely questioning of many of the teachings of the Catholic Church in my journey home to the Church I came to see that the proclamation of the early Church Council of Ephesus that Mary is "Theo-tokos",  Greek for Mother of God, was a profoundly Christological declaration. It was spoken to confront growing heresies in the Church which undermined the very core proclamation of the Gospel about who Jesus is. The Second Person of the Blessed Trinity, the Word Made Flesh, Jesus the Christ, was truly both God and Man. The Incarnation was central to the Christian claim. The One whom Mary bore was and is truly God and truly man.

I studied the historic background of the proclamation and came to understand what was truly at stake. When I read this simple proclamation of the Catechism of the catholic Church years later, "What the Catholic faith believes about Mary is based on what it believes about Christ, and what it teaches about Mary illumines in turn its faith in Christ."(CCC #487) it all made sense.

My study of early Church history revealed the presence of Marian piety and devotion, from the extraordinary frescoes in the catacombs to the reflections of the early church fathers on the significance of her role in salvation history and her continued role in the life of the Church. As my knowledge of the lives of the saints, and their prayer lives increased, I had to decide whether all of their writings about Mary reflected some kind of "bad theology" or, perhaps, I had missed something. Fortunately, I arrived at the proper conclusion.

But, even after all that, Mary was still to me the Mother of the Lord. I could accept in concept that she was a mother to the Church, but...not yet 'my Mother". The progression continued. It was only as I prayerfully reflected on the last hours of Jesus' earthly ministry recounted in the fourth Gospel, the one attributed to the beloved disciple John, that this all began to unfold and become personal for me.

"When Jesus saw his mother, and the disciple whom he loved standing near, he said to his mother, 'Woman, behold your son.' Then he said to the disciple, 'Behold your mother'" (John 19: 26-27). Throughout the Church's rich history and Tradition great theologians, mystics, popes and saints have all viewed John as representing you and me. The last gift Jesus gave before giving every drop of His Sacred Blood was His mother.

We who are baptized are now "incorporated" into Christ. We live our lives now in His Body. The Head and the Body are eternally joined in a communion of love. St. Augustine - and countless Saints both East and West â€" writes concerning the "whole Christ" as both head and body. (cf. Colossians 1:18, Ephesians 4:15). Everything Jesus has He has given to His Church. That includes His Mother. She is also the Mother of His Mystical Body, His Church and we are members of that family.

As the years unfolded I found that every one of the great influences in my Christian life from that communion of saints to which we are all joined was profoundly "Marian". Francis of Assissi, Bernard of Clairvaux, the early fathers, St Jose Maria Escriva, leading all the way up to my the one I call my champion, Blessed John Paul II, all had a deep love and devotion to Mary as Mother. I began to pray Blessed John Paul's prayer of consecration, "Totus Tuus" and made it my own. Then, the grace was given. This little Virgin from Nazareth whose "yes" brought heaven to earth and earth to heaven went from being the mother and a mother to - "my mother."

Our Catechism reminds us "What the Catholic faith believes about Mary is based on what it believes about Christ, and what it teaches about Mary illumines in turn its faith in Christ. "God sent forth his Son", but to prepare a body for him, he wanted the free co-operation of a creature. For this, from all eternity God chose for the mother of his Son a daughter of Israel, a young Jewish woman of Nazareth in Galilee, "a virgin betrothed to a man whose name was Joseph, of the house of David; and the virgin's name was Mary" (Lk. 1:26,27).

"Called in the Gospels "the mother of Jesus", Mary is acclaimed by Elizabeth, at the prompting of the Spirit and even before the birth of her son, as "the mother of my Lord". In fact, the One whom she conceived as man by the Holy Spirit, who truly became her Son according to the flesh, was none other than the Father's eternal Son, the second person of the Holy Trinity. Hence the Church confesses that Mary is truly "Mother of God" (Theotokos), (CCC, 495,496; Council of Ephesus, 431 AD).

For more reflections on Mary, the Mother of God, please visit our virtual pilgrimage site here. My readers can also order a book I wrote several years ago entitled "The Prayer of Mary: Living the Surrendered Life" here.