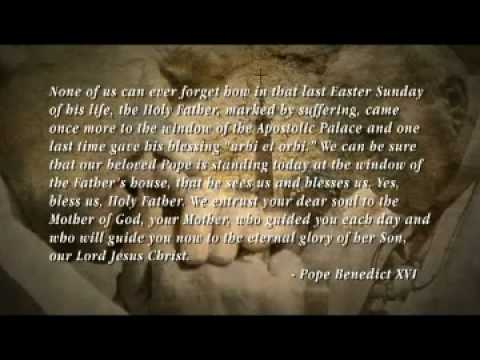 CORPUS CHRISTI, TX (Catholic Online) - The arrival of the new English translation of the Roman Missal provides an excellent opportunity to not only understand the changes that will take place, but to understand the Catholic Mass in and of itself.  This week, let us take a look at the bodily gestures that we use during our worship.

Bodily gestures in the Catholic liturgy are very important. Every time that we participate in the Holy Sacrifice of the Mass, our bodily gestures make up a very important part of our worship. Making the sign of the cross, genuflecting, sitting, standing, kneeling and the beating of our breast are all components and expressions of worship.

In recent times, there has been much confusion regarding certain aspects of our hand gestures during the Catholic Mass. I would like to address this confusion as we approach the implementation of the revisions to the Roman Missal..

There are three questions that are always being asked: 1) Is gesturing toward the priest with the hand while responding"And with your spirit" considered correct? 2) Should the congregation pray with hands held in the orans position during the Our Father? 3) Is holding hands as the congregation recites the Our Father correct or even appropriate?

At the present moment, it is true that there is not a single ruling on the subject of hand gestures, either from the Congregation of Divine Worship and Discipline of the Sacraments or from the U.S. Conference of Bishops. I believe that definitive norms on gesturing would provide clarity and uniformity. However, in the absence of such a norm, I would like to share my thoughts on the subject.

Regarding the first question, as to a gesture on the part of the people towards the priest when the people respond "And with your spirit", my research on the subject reveals no historical basis for this gesture within the liturgical tradition of the Latin Rite of the Catholic Church. Nor is there any history of people gesturing with their hands during the beginning of the Preface or even the raising of hands during the recitation of "For the kingdom, the power and the glory are yours no and forever."

These hand gestures, which have become quite common in parishes throughout the country, are innovations that have been introduced.

Secondly, as to praying with hands held in the orans position during the Our Father, there is an historical precedent for this bodily gesture in Catholicism. Pope Benedict XVI, writing as Cardinal Josef Ratzinger, in his widely popular book, The Spirit of the Liturgy, provides a detailed discussion of this subject (203-204). That being said, it is also true that praying with folded hands has always been part of our Catholic tradition.

However, I would argue that praying with hands held in the orans position during the Lord's Prayer or at other moments in the liturgy by the congregation is an innovation that has been introduced and encouraged as a novelty.

No one has the authority to spontaneously introduce novelties within the Catholic liturgy.

The process for introducing any new rite or gesture into the liturgy in a stable or even binding manner is already contemplated in liturgical law. This process entails a two-thirds majority vote in the Conference of Bishops and the approval, or what is called the recognitio from the Holy See, before any change may take effect. Thus, if neither the U.S. Conference of Bishops nor the Holy See has seen fit to prescribe any posture for the recitation of the Our Father, it hardly permits any lesser authority to impose a novel gesture not required by liturgical law and expect the faithful to follow their decrees.

Regarding these innovative gestures and the silence on the part of the Holy See and the Bishops' Conference, it seems to me that there is a very clear answer on the subject. We need to keep in mind that the revised Roman Missal from Vatican II is not a departure from the Missal in use previously. The liturgical reform mandated by the Second Vatican Council organically flows from the Tridentine liturgy.

"In setting forth its instructions for the revision of the Order of Mass, the Second Vatican Council, using the same words as did St. Pius V in the Apostolic Constitution Quo primum, by which the Missal of Trent was promulgated in 1570, also ordered, among other things, that some rites be restored 'to the original norm of the holy Fathers'. From the fact that the same words are used it can be seen how both Roman Missals, although separated by four centuries, embrace one and the same tradition. Furthermore, if the inner elements of this tradition are reflected upon, it also becomes clear how outstandingly and felicitously the olderRoman Missal is brought to fulfillment in the new" (General Instruction on the Roman Missal, #6).

In conclusion, regarding the use of bodily gestures within the Catholic Mass, it seems to me that there needs to be unity. The people become confused when one parish does one thing and down the road or in the next town, another parish is doing something entirely different. "Therefore no other person whatsoever, not even a priest, may add, remove, or change anything in the liturgy on their own authority" (Vatican II, Sacrosanctum Concilium, #22.3).

Father James Farfaglia is the pastor of Our Lady of Guadalupe Catholic Church in Corpus Christi, Texas. Visit Father James on the web at http://www.fatherjames.org and purchase his new book Get Serious! A Survival Guide for Serious Catholics.  Father has a hard hitting blog called Illegitimi non carborundum.  You can contact Father James at fjficthus@gmail.com.  Click here for the audio podcast of this homily which is posted every Sunday afternoon.