The Legionaries of Christ - Who is Really In Charge?

Free World Class Education
FREE Catholic Classes
An explosive new book opens the issues up for even closer examination
Thousands of scandalized and disappointed former Legionaries of Christ, Regnum Christi members and generous benefactors are wondering what will happen to the shipwrecked religious order.In an explosive new book which has been rocking the news in Mexico, Nelly Ramírez Mota Velasco tells all in an objective and clear manner, free from any venom. 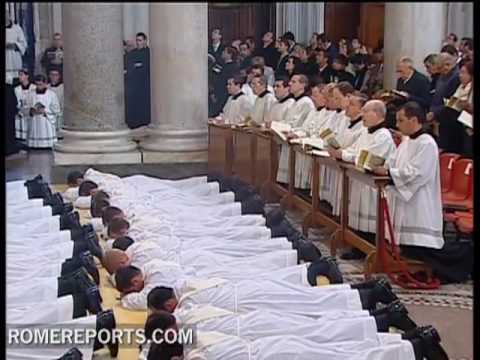 CORPUS CHRISTI, TX (Catholic Online) - With the remembrance of September 11th behind us, a tragedy that has had tumultuous consequences on the lives of thousands of Catholics around the world is the Legionaries of Christ fiasco.

Founded in Mexico in 1941 by the late Father Marcial Maciel, the controversial and charismatic leader was sanctioned by Pope Benedict XVI on May 19, 2006 in an official communiqué from the Holy See for leading a "private life without scruples or authentic religious sentiment."

In an explosive new book which has been rocking the news in Mexico, Nelly Ramírez Mota Velasco tells all in an objective and clear manner, free from any venom.  "The Kingdom of Marcial Maciel - The Hidden Life of the Legion and Regnum Christi" is a fast read for anyone who is interested in understanding how the Legionaries of Christ could rise to power and success, only to suffer one of the greatest meltdowns in modern church history.

Born in Mexico City in 1973, Nelly was educated in the Godwin Institute and the Anáhuac University which are part of a vast empire of Catholic schools run by the Legionaries of Christ.

Scrupulously researched and documented, her book names names, dates and places.  Courageously she answers doubts and questions that many former Legionaries and Regnum Christi members have been asking for quite some time.

How is it possible that someone like Maciel, who has had a repugnant history of homosexual escapades since his time as a young seminarian and a young, promising founder of a new religious order (pp. 40-48) could rise to the height of power, influence and success with the evident approval of popes, bishops, political leaders and thousands of the lay faithful?

Thousands of scandalized and disappointed former Legionaries of Christ, Regnum Christi members and generous benefactors are wondering what will happen to the shipwrecked religious order.

Cardinal Velasio de Paolis has been given the task, by Pope Benedict, to steer the Legionaries of Christ through a period of renewal and reform.  Many wonder if such a task is even possible.

One aspect of the Legion of Christ that de Paolis should pay close attention to is an organization called the Integer Group (Grupo Integer).

Ramírez dedicates the ninth chapter (pp. 167-177) of her book to the topic of Integer, and her data raises even more doubts and questions regarding the rather mysterious figure of Legionary of Christ priest Father Luis Garza Medina.

Garza, a member of the financially powerful Garza family from Monterrey Mexico, recently left behind his many years as the number two man of the Legionaries of Christ to become the Territorial Director (Provincial) for the Legionaries in the United States.

Integer, a holding company for all Legion of Christ and Regnum Christi properties is Garza's creation and he runs it, although he is not listed as the head.  Moreover, his family and his closest friends are all involved in Integer's day by day operations.

According to Nelly Ramírez's new book, the Legion of Christ priest in charge of Grupo Integer is Father Alberto Simán and the General Director of the organization is René Lankenau, father-in-law of one of Garza's nieces.

Integer's world headquarters is located in Monterrey.  On paper, Garza has nothing to do with Grupo Integer, but according to Ramírez, he heads the annual meetings located in Chipinque, Monterrey.

Father James Farfaglia was a member of the Legionaries of Christ for twenty-one years.  Upon leaving the Legionaries in 1999, he founded Saint Andrew the Apostle Catholic Church in Lufkin, Texas and Saint Helena of the True Cross of Jesus Catholic Church in Corpus Christi, Texas.  Author of two books, Father is currently the pastor of Our Lady of Guadalupe Catholic Church, also located in Corpus Christi.  You can visit Father James on the web at http://www.fatherjames.org.  His email address is fjficthus@gmail.com