Yes, the USA is winning against coronavirus. Is it time to reopen?

So far, none of the dire COVID-19 predictions have come to pass. The USA is far below the one million deaths initially projected by the experts. And as time drags on, millions are wondering about the impact to the economy. Won't a second great depression be deadlier than COVID-19? Shouldn't we just go back to work already? 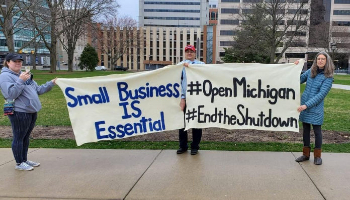 Protesters call for the reopening of business amid lockdown orders.

LOS ANGELES, CA (California Network) - America is beating coronavirus. The infection rate is falling and the "curve" is flattening. In most places, makeshift tent hospitals have gone unused. Several states appear to have passed the peak of infections and people are getting better. There are still hotspots, places where infrastructure is overwhelmed, such as in New York City. But for most of the nation, there is a sense the danger is passing. And this feeling is prompting people to wonder about the economic consequences of staying indoors for much longer.

Millions of Americans are out of work, with about 22 million workers filing for benefits. The actual number of unemployed is believed to be higher. As firms struggle amid the mandatory shutdown, the numbers out of work are expected to grow as businesses spend their last dollars on rent and are forced to close for good.

The reason for the low numbers of infected persons and fatalities can be attributed to social distancing orders. The banning of mass gatherings, the closures of schools and nonessential businesses, and the implementation of social distancing are working to "flatten the curve." This is a reference to suppressing the number of new cases in a community so that local healthcare infrastructure can provide beds and treatment for all the sick. A hospital can treat hundreds of people over several weeks, but not in one day. The orders keeping millions of people at home have slowed the transmission of the virus and now hospitals are at least able to treat most of the sick.
And while thousands are dying, there is hope those numbers are starting to peak and will soon go into decline. As of Thursday, 33,000 Americans have died of coronavirus infection, with 4,591 people dying on Thursday. But many experts believe this is the peak, and things are going to improve within days.

Sadly, the pandemic has become a political spectacle in the United States, where many believe the outbreak is being exploited for political gain. This is likely true. The problem is, it creates unhealthy skepticism and encourages people to become defiant in protest. Those acts of defiance, such as churches that congregate, and public gatherings for protests and other activities, provide an opportunity for the disease to spread. At least a few Christian pastors have defied the orders to close their churches and subsequently become infected and died. Coronavirus is indifferent to our politics.

But the skeptics are correct that the economic damage is severe. Several economists are already using the term "depression" to refer to what's coming. And the economic data suggests the recovery will be long, rather than a quick bounce back to normal. And the longer stay-at-home orders remain in place, the longer the recovery is likely to take.

For now, the experts are warning against lifting the stay-at-home orders too soon. Several epidemiologists warn lifting the orders too soon will result in a larger spike in cases, a second wave worse than the first. Meanwhile, economists are warning that operating a business in the middle of a pandemic is worse than leaving it closed. These arguments are based on data from the 1918 Spanish flu pandemic. At that time, many cities responded differently. Some imposed immediate quarantines and did not lift them until the danger was passed. Others tried to remain open for business. The data suggests those that quarantined and remained closed for the duration experienced a must faster recovery than those that did not.

And we can observe the same thing in China, where the government employed draconian measures to end the outbreak. And while those measures were severe, they are also effective, or at least we are lead to believe so. Meanwhile, nations like Sweden, which has attempted to remain open are seeing a spike in cases and economic decline.

The data suggests there is no conflict between public health and economic well-being, as widely assumed. Rather, both go together.

If the data is true, then the American people should be willing to endure an extended period of quarantine. The payoff is a faster economic recovery. And the idea that the economy must go into recession is also a hasty conclusion. It is possible for the federal government to provide stimulus to small businesses and households to keep people in their homes and their jobs open. But this requires political will and a strong resistance to corruption, so the money ends up in the hands of those who need it rather in the hands of hedge-fund managers, as witnessed with the present "bailout" package.

We can reopen the country and we can recover without a second great depression. We can bail out small business, landlords and individual households. But we must be informed by the data, not the politics of our time.