A Catholic medical research institute has claimed some successes in providing alternatives to research that harvest cells from human embryos--but it says such research needs more resources to compete. 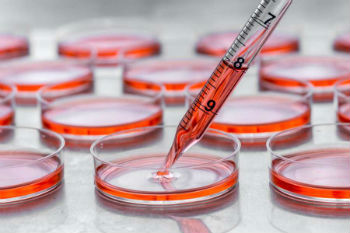 Iowa City, (CNA) - A Catholic medical research institute has claimed some successes in providing alternatives to research that harvest cells from human embryos--but it says such research needs more resources to compete.

"There aren't very many research organizations that we have seen that have taken a pro-life stand that we have, namely we won't either support embryonic stem cell research or participate in it," Jay Kamath, president of the Iowa-based John Paul II Medical Research Institute, told CNA Nov. 7.

The research institute, now based in the Iowa City suburb of Coralville, was founded in 2006. It has a research staff of about 12.

In recent years, the institute has pioneered a new technique to create adult stem cells, and its products have helped explore treatments for at least one rare disease. The organization hopes to build on these successes and demonstrate the effectiveness of ethical stem cell research.

Stem cell research today relies on cells taken from either human embryos or mature tissue. Stem cells harvested from embryos have a high degree of potential because they are capable of developing into any other tissue type in the body. However, they require the destruction of a human life at an early embryonic stage, making them ethically controversial. In addition, these cells can show instability and have a propensity for developing tumors. Critics note that despite significant federal funding, embryonic stem cells have failed to deliver cures for any diseases thus far.

Research on adult stem cells is more limited because these cells have less capacity to develop into various types of tissue. However, this research does not destroy a human life, because it is taken from developed tissue rather than a human embryo.

In recent years, the creation of induced pluripotent stem cells has brought hope to researchers looking for additional options. These cells have the ability to become any type of cell but are created from adult stem cells, avoiding the ethical concerns posed by embryonic stem cell use.

"The reality is that embryonic stem cell research is still being well-funded and still continues," he said. "It is something that the large number of medical research organizations either participate in directly or support participation in. The National Institutes for Health and the like are funding this kind of research."

The John Paul II Medical Research Institute hopes to be a leading figure in offering alternatives to embryonic research. Since the institute's founding in 2016, it has seen a number of significant accomplishments.

"We've been able to differentiate these stem cells into every type of tissue that's available in the human body," Kamath said. "We have a huge repository of stem cells."

While induced pluripotent stem cells are often created through the use of viruses or a type of tumor-creating gene called oncogenes, Kamath said, the John Paul II Institute has developed new, different methods.

Dr. Alan Moy, M.D., co-founder of the John Paul II Medical Research Institute, has co-authored papers on the virus- and oncogene-free process for creating stem cells in two different papers: one in Regenerative Medicine dated Nov. 28, 2018 and one in Future Science OA, dated May 12, 2017.

Research at the John Paul II Institute has also helped two sisters who suffer from Niemann-Pick disease type C, a rare disorder that affects the body's ability to transport cholesterol and other fatty substances within the cells. The disorder can cause dementia-like problems at an early age, and can kill if left untreated.

Researchers harvested stem cells through a biopsy of the patients and used these cells to test a drug called cyclodextrin, in participation with a National Institutes of Health lab.

"We were one of the first to collaborate and show that this drug is effective in a laboratory setting through our clinical research," Kamath said. Researchers were able to advance the drug to a small-scale clinical trial. That trial has grown and is "helping these children fight off this disease."

The institute's researchers presently are developing two separate adult stem cell lines, from placenta and cord blood. The cell lines are in a process called "immortalization" - a technical term for the state in which cells grow indefinitely in artificial cell culture conditions.

He said the research institute aims to use adult stem cells to build a "platform" to research various types of diseases: cancer; neurological diseases, like Lou Gehrig's Disease, Alzheimer's, Parkinson's, and Multiple sclerosis; chronic diseases such as pulmonary disease, heart disease and diabetes; and rare diseases that number in the thousands but affect few people in number.

The institute encourages people with rare diseases to sign up for its patient registry so that it can potentially help the latter if any relevant research moves towards clinical use.

Looking to the future, Kamath said securing continued funding and raising awareness about the ethical research at the institute is an ongoing obstacle.

In 2014, the ALS Ice Bucket Challenge went viral on social media, asking people do dump ice water buckets on their heads and challenge others to do the same, while encouraging donations to the ALS Association, which funds efforts to cure amyotrophic lateral sclerosis, also known as Lou Gehrig's disease.

Catholic commentators, including several bishops, noted that the ALS Association at the time was willing to use embryonic stem cells, and they referred potential donors to the John Paul II Medical Research Institute instead.

Moy, the medical research institute's founder, warned that there is little evidence that the pharmaceutical industry is interested in creating new ethical cell lines.

"It's our goal to someday validate that these cell lines can achieve and exceed the performance of aborted fetal cells currently used in biomanufacturing," Moy said.

The John Paul II Medical Research Institute's Campaign for Cures seeks to raise $300,000 by the close of 2019. It is currently about one-third of the way to the goal.