Breastfeeding is part of God's natural plan, and we need to do more to encourage it

Free World Class Education
FREE Catholic Classes
WHO and UNICEF say the USA is failing when it comes to support for breastfeeding.

Breastfeeding is a sensitive topic in many cultures, but it should not be. Historically, breastfeeding is a normal part of caring for young children and was not stigmatized. Unfortunately, the sexualization of the female breast and Victorian prudishness has discouraged many women from providing nourishment to their children in the way God intended. 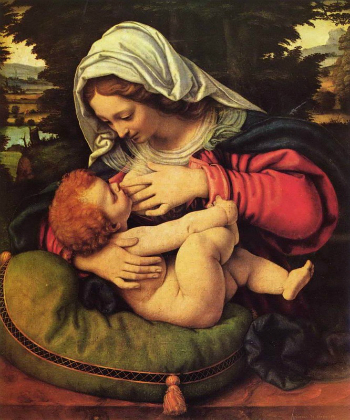 LOS ANGELES, CA (California Network) -- The World Health Organization (WHO) and the United Nations Children's Fund (UNICEF) has announced no country supports breastfeeding like they should.

The WHO recommends that a newborn child be breastfed within the first hour after birth. The practice is instinctive and the woman's body often produces the milk in advance of the birth. The milk is rich in nutrients for the baby and arguably provides its first natural protection from diseases. Breastfeeding also stimulates hormones that facilitate bonding between the mother and child.

This natural way of feeding can create a bond of love and security between mother and child, and enable the child to assert its presence as a person through interaction with the mother. -Pope John Paul II

Despite the WHO recommendation, only 44 percent of infants around the world are breastfed within the first hour following their birth. Poorer countries tend to have better rates of breastfeeding, but that's because mother's milk is the most practical, or only option.

The lack of adequate maternity leave and the requirement that mothers return to work despite nursing a child means that children are quickly switched to formula. The U.S. does not require employers to offer paid maternity leave. All other western, industrialized nations do so.

Hospitals in the U.S. also fail to support recommended breastfeeding practices. Only 18 percent met WHO guidelines for a passing grade.

Many mothers think formula is acceptable as an alternative to breast milk. This is a product of advertising, although to their credit, many formula producers state that breast milk is superior.

Finally, breastfeeding is not considered socially acceptable in many parts of the world. In the U.S., women who breastfeed are told to "cover up" or to "leave the room." This makes breastfeeding more of a hassle than it ought to be. The reason for this is the sexualization of the female breast in western culture. Rather than seeing the act for what it is, feeding a child, some people claim to be offended --or excited by the sight. In these cases, the problem is not the mother, but the person obsessing over the practice of feeding and bonding with a child.

Improving breastfeeding rates requires that people support mothers with hungry babies. Avoid paying undue attention to the deed when it's done. It must be seen as a natural act like any other love a mother might give their child. Paid maternity leave must become law in the United States, and expanded elsewhere to ensure mothers can breastfeed for as long as needed. And public education and awareness must be raised so people appreciate the benefits of the practice.