The one shocking number that reveals our nation's greatest weakness

Free World Class Education
FREE Catholic Classes
Up to half of all Americans are on drugs to cope with the rigors of life.

One-third of adult Americans were prescribed opioids in 2015. When combined with the numbers of people who use these drugs illegally, and those who use illegal narcotics and alcohol, the number of Americans hooked on one substance or another may exceed fifty percent. These findings coincide with surveys of the manufacturing sector that show half of blue collar job applicants cannot pass a drug test. 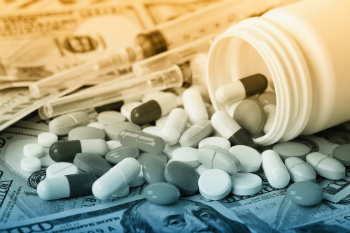 In 2015, over 92 million Americans were prescribed opioid painkillers.

LOS ANGELES, CA (California Network) -- The American people are at war, but the enemy appears to be within the country, not outside it. With more than a third of adults in the U.S. were prescribed opioids in 2015, and many more are using them illegally, or are using another substance to cope. Up to half of our nation's working age adults are hooked on something.

Imagine the devastation that would be caused should an enemy manage to bomb half of our adult population? From a labor perspective, this is exactly what has happened, except the enemy is ourselves.

This is a profound moral and physical weakness which is costing us in terms of money, productivity, health, and human life. It is also exacting an unknown political toll on our society since a drugged population is indifferent to how it's governed.

Research conducted by the National Institute on Drug Abuse found that 92 million Americans used opioids in 2015.

If alcohol, illegal narcotics, and prescription drug abuse are factored in, up to half of working age adults in America are using some kind of substance to cope. Physical pain is the most common complaint; however, many people use drugs to cope with psychological pressures.

Why is our country awash in drugs?

First, the marketing is good. Americans have learned to be craven and shun pain at all costs. Pain relief is a multi-billion-dollar industry, approaching $50 billion dollars worldwide. Most of that money is generated in the United States. Some of it is spent telling Americans that pain is bad, unnatural, and can be easily fixed with a pill or some other simple treatment.

Second, Americans have weak coping mechanisms. As a culture, we have been emasculated and taught that it's okay to cry, but better to take a pill and forget about it. We take days off for minor aches and pains. We accommodate the man cold, and rush kids to the ER when they have the sniffles. Where our ancestors might have simply toughed it out, we have drugs on hand in this brave new world.

Third, there is an evil alliance between big pharma, the insurance industry, and the federal government. If this sounds like the start of a conspiracy theory, that's because it is. Sometimes the conspiracy is true. In this case, executives from the insurance and pharmaceutical industries wrote the law that is Obamacare. The law says a doctor cannot challenge a patient when they declare a pain level. Every person knows the fastest way to get opioids is to visit a doctor, declare a pain level of 10, and in many cases, the physician is required to write the prescription. Why would anyone with common sense allow such a law to pass, knowing it would take a terrible toll on people? Perhaps because that's the desired outcome.

Fourth, there is no real oversight or enforcement by the federal government. While the DEA, FBI, and other three-letter organizations make routine busts of small-time dealers, traffickers, and marijuana growers, the biggest peddlers of drugs work in full view of the public while the government pays for it using your tax dollars. Only last month was the first ever crackdown on doctors and pharmacists announced. It netted over 400 people trafficking in illegal prescription drugs, but this number is just a drop in the bucket.

Ninety-two million Americans have opioid prescriptions. Tens of millions more use something else, including narcotics and alcohol. Busting 400 dirty doctors and pharmacists won't reduce the problem, and the hooked patients will simply go elsewhere for their next fix, as all addicts do.

These figures match similar findings from the manufacturing sector which laments that half of all workers cannot pass a drug test. Manufacturing executives say the drug epidemic is the greatest threat they face, not competition from the outside.

How many people are at work right now, while high on painkillers or something else? How does this impact safety and productivity?

This is a national crisis. If a foreign agent was discovered lacing our food or water supply with dangerous chemical compounds, that alone would be a cause for war.

It is time to reform, replace, or repeal Obamacare, especially the provision that allows doctors to hand out opioids on demand. We need to teach pain management as opposed to prescribing pills. Diet, exercise, and prudence can help people avoid pain in the first place. For people who suffer, there may be less destructive alternatives that can help them manage pain.

We must understand that pain is a natural part of life. The impulse to eliminate pain and feel nothing is an artificial impulse, programmed into us by hours of relentless marketing and conditioning. The more we suffer, the more we will pay to eliminate the pain, and the more profitable and controllable we become.

Instead of taking a pill, we should find more reasonable remedies. Pain is also an invitation to prayer and reflection. Opioids are available for the worst pain, and can be appropriate in some cases, for example patients suffering from painful, terminal illnesses such as cancer.

But 92 million Americans do not have terminal cancer, or impassable kidney stones, or some other painful, debilitating condition. It's time to quit the drugs and ask why so many of us are hooked on them.

When we answer the question why, we will discover the truth about our nation, how it is run, and for whom, and we will know what we have to do to fix it.