Archbishop Vigano drops a bombshell everyone MUST READ

Archbishop Carlo Maria Vigano recently spoke about a series of issues confronting humanity. The words he shared are alarming because they expose a plot to undermine society as we know it. His comments demand respectful consideration, and wise reaction. Fortunately, there are wise and prudent steps people can take. 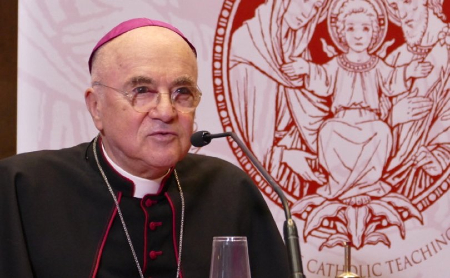 LOS ANGELES, CA (California Network) - The Archbishop is one of only a few prominent persons pushing back on mainstream narratives dealing with the Russia-Ukraine War and the COVID pandemic. As is common throughout history, the truth is often the first casualty and only later do the details emerge to prove what most people thought and believed was a lie. The Archbishop may be one such person, telling the truth in a whirlwind of lies. Archbishop Vigano was interviewed by attorney Reiner Fullmich, and quotations from him are published here.

Fullmich began his interview by asking the Archbishop about the attacks on his credibility. The Archbishop explained:

"False accusations are one of the means used by those who want to eliminate an adversary whom they fear and cannot fight fairly. In this case, I am considered inconvenient both by the exponents of the deep church and the Bergoglian cabal, whose scandals and cover-ups I have denounced since the time of the McCarrick case. And I am equally inconvenient for the deep state, which has been able to count on the complicity of the Holy See as well as almost the entirety of the global Episcopate in the events of the last few years. The dissonant voice of a Bishop, especially when he formulates reasoned complaints based on irrefutable facts, risks putting the official narrative into question, both on the alleged renewal of the Church under this 'pontificate' as well as on the pandemic farce and mass "vaccination." Even the recent Russian-Ukrainian crisis significantly finds the globalist elite, NATO, the American deep state, the European Union, the World Economic Forum, the entire media machine, and the Vatican all aligned on the same side. Putin's intervention in Ukraine is considered a threat to the New World Order that must be neutralized even at the cost of a global conflict.

"Thus, if I must identify a 'breaking point' on the ecclesial front, it definitely coincided with my denunciation of the network of complicity and the scandals of corrupt clergy and Prelates which Bergoglio has deliberately and obstinately sought to cover up. On the civil front, it seems to me that the red line was crossed with my Appeal for the Church and the World, launched two years ago in May 2020 by which I denounced the threat represented by the silent coup carried out by means of the health emergency. The energy and food emergency, in addition to the war emergency, are always part of the disturbing â€˝scenarios" that the World Economic Forum and the United Nations have described in great detail well in advance. When, one day not too far in the future, a tribunal judges these criminals and their accomplices in the institutions of almost all of the Western nations, these documents will constitute the proof of the premeditation of the greatest coup d'Ă©tat of all time. And the same thing will happen with regard to ecclesial affairs, demonstrating that the doctrinal and moral drift that originated with the Second Vatican Council created the necessary premises for the doctrinal and moral corruption of the clergy and the simultaneous delegitimization of the authority of the Shepherds. Let us not forget that the revolutionary processes have always relied on the vices and weaknesses of its representatives, both to destroy the State and to weaken the Church."

Fullmich then asked the Archbishop about COVID, which is now in its third year, and how this ties in with the conflict in Ukraine.

This is where the Archbishop mentioned the "Great Reset." The Great Reset is an alleged plan to cause people to look up to global elites as saviors (Gates, Bezos, Musk, et. al.), and lead them blindly to their doom. The means of this is to suggest to people that the global environment must be saved, and this requires great and painful sacrifices, and possibly even the reduction of the human population, which can be achieved through sterilization, abortion and abortifacients, pandemic disease, a reduction of the food supply, warfare and economic crises, and possibly biological or even neurological warfare.

"Let's clarify a fundamental point: the Ukrainian crisis was deliberately provoked by the deep state in order to force the world to carry out the Great Reset reforms, in particular the so-called 'technological transition' and the 'green shift.' It is the second stage of the globalist technocrat coup, after the pandemic farce."

The Archbishop then dropped this bombshell revelation:

"At the Davos Forum the CEO of Pfizer Albert Bourla said: 'Imagine a biological chip that is included in a pill, that when it is swallowed goes into the stomach and emits a signal. Imagine the applications, the possibility of making people obey. What is happening in this field is fascinating.' And Albert Bourla says 'what is happening' because he is talking about existing technologies, not imaginary projects. The presence of graphene and self-assembling nano-circuits is now admitted even by those who a year ago called those who were sounding the alarm 'conspiracy theorists.' The populations of the nations adhering to the Agenda 2030 are now mostly 'vaccinated,' or rather they have been genetically modified and their immune systems have now been compromised in an irreversible way. And perhaps -- as some lawyers are now denouncing -- it will be discovered that along with the genetic serum they have injected chips that are capable of controlling even people's reactions, interfering with their behavior, and making them docile if there are riots, or violent if it is necessary to have a pretext for military interventions. We are well beyond a global coup: this is the greatest, most sensational, unprecedented attack on the human person -- on man's freedom conscience, and will."  [Note: this constitutes neurological warfare.]

The Archbishop's comments will certainly stir reaction. The mainstream media accuses him of promoting conspiracy theories. But what if his words are true? What is he is one of a few people who are paying attention, and who know and understand that the wealthy elites, who are far along in their quest to establish a "New World Order" are doing?

Before you dismiss all of this as conspiracy, consider these questions:

Who knows where Davos is, what it is, who attends it, and when it is held?

Who knows what the Bilderberg Group is?

Who knows why the emergence of COVID in the city of Wuhan, of all places, is suspicious?

Who knows the correct number of brands that own and control the majority of the world's food supply? Take a guess between 10 and 100. (Answer below.)

In the United States, the land of "free speech," how many companies own and control 90 percent of the media? Take a guess between 1 and 50. (Answer below.)

How many Americans can identify the Kardashian sisters?

How many Americans can identity the "Three Sisters" of agriculture? Who can explain why they are important?

Who knows how to filter water to make it drinkable?

How many can list the Ten Commandments, or the names of the 12 Apostles? Who can identify the first Pope?

Who knows where their food comes from?

How many people are "prepped," but think that means hiding in a bunker, or running to the hills with guns and ammo? How many people are networked with those who can grow food, repair things, treat illness and injuries, resolve disputes without law, or teach what is important to others?

The fact is, most people in the United States, and around the world for that matter, are ignorant of the walls closing in around their freedom, food, and health. It's much like the analogy of the frog in a pot set to boil. The frog finds the water fine at first, but it gets hotter by degrees and before the frog knows to jump to safety, the heated water kills it.

Even if one claims the Archbishop is wrong, or that his statements are hyperboles, can we not agree that the systems around us are collapsing, that governments have become increasingly corrupt, that wealth and power are concentrated in too few hands, that quality of life is diminishing for most?

Can we agree that most people know too little, that we are asking the wrong questions, we are too obsessed with the gossip, the sports scores, the trivial day-to-day problems that impact our household to pay attention to the bigger picture? Who thinks about Davos when they have bills to pay, a car that needs repair, or a job in jeopardy?

If we can agree on that, then we must consider it is possible that people like Archbishop Vigano are sounding a clarion call that all people of good conscience must heed. The danger of inaction is too great to ignore these concerns.

We need to develop local sources for food, healthcare, and satisfying our critical demands, and we need to push back against the powers of globalism that threaten to destroy freedom, faith, and life itself.

The Archbishop, whether you like him or not, is doing the world a massive favor.

Ten corporations own and control the vast majority of the world's food supply.

The news media is owned and controlled by just six companies.

The Three Sisters in Agriculture.