Darwin's Theory at Work? Man taunts bison -- here's how that turned out

Free World Class Education
FREE Catholic Classes
As a consequence of the Fall, man and animal do not live in friendship.

In a viral video, a man is seen taunting a bison in Yellowstone National Park. The behavior is both unacceptable and dangerous and serves as a reminder that we do not live in friendship with the creatures of the Earth. 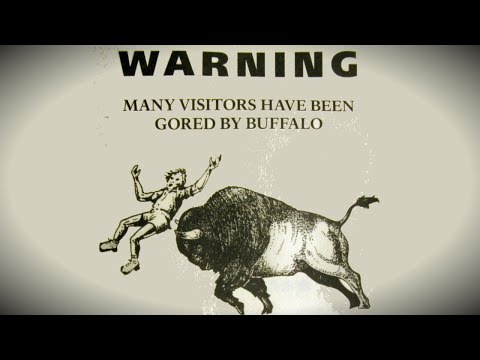 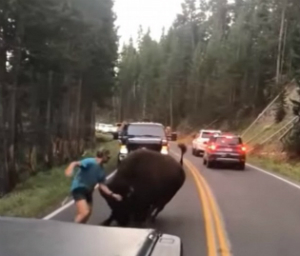 That moment when you regret your decision to do something foolish and can't take it back.

The video captures the unidentified man as a bison is crossing a traffic-laden two-lane road. The cars are stopped to allow the beast to cross. However, one man in a blue shirt has exited his vehicle and is creeping up behind the bison.

The bison notices the man and squares off, but the man does not retreat. Challenged, the bison charges a few steps, forcing the man to dodge. The camera is panned away from the potentially terrible sight. It pans back to the man and the bison. The majestic creature decides the man is not worth his attention, and he begins to stroll along the road. The man makes his way back toward his vehicle, unharmed.

It was a close call. Bison have already injured two people this year in Yellowstone. The beasts can weigh up to 2,000 pounds and are surprisingly quick. They have horns on their heads which can gore a victim who annoys them.

Authorities would like to identify the man, and if they do they will fine him. It would be a light penalty, all things considered. By law, people are not permitted to come close to wild animals or to interact with them in the park. The man could have easily been killed or seriously injured --Darwin's theory at work.

The incident is a reminder that we do not live in friendship with the animals. The fall caused us to lose this privilege, a consequence of Original Sin. Most animals fear people, even powerful ones such as bison and lions. However, if cornered or if protecting territory or cubs, such animals will attack, often with fatal results.

Last month three rhino poachers in a South African park were killed and eaten by a pride of hungry lions.