Forget North Korea, forget the zombie apocalypse. THIS is the greatest threat the world faces today

As the world concerns itself with North Korea and terrorism, there is a greater threat lurking all around us, climate change. According to David Wallace-Wells in New York Magazine, we are facing a doomsday scenario where people will literally be cooked from the inside out within hours. 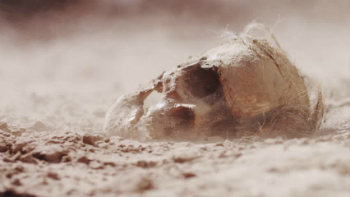 Much of the world could become uninhabitable according to some worst-case scenarios.

LOS ANGELES, CA (California Network) -- "It is, I promise, worse than you think," Wallace-Wells opens in his article. He then predicts that any teenager alive today will see global warming devastate the Earth, beyond out worst imaginings to date.

It isn't just the rising sea levels that will change the coastlines forever. It's the incredibly hot temperatures too, and the diseases.

The temperature of the planet is climbing, causing the Arctic permafrost to thaw. This thawing releases CO2 and methane, which are powerful greenhouse gasses. There are 1.8 trillion tons of carbon in the permafrost, and the methane trapped within is 34 times as powerful as CO2. As these gasses are released, they warm the planet further, accelerating the thawing. Within decades the planet will become virtually uninhabitable.

Temperatures in the tropics could become so hot that when combined with high humidity they turn lethal, literally cooking people alive from the inside out within hours.

Microbes are also trapped in the permafrost, germs that haven't been seen in thousands of years. These diseases, such as smallpox, could reenter the human population at a time when no humans have natural immunity. Billions could be wiped out in plagues of biblical scale.

Wallace-Wells suggests that our obsession with zombies and post-apocalyptic movies is the product of displaced fear over climate change.

Wallace-Wells based his article on interviews with dozens of climate experts and represents what he calls, â€˝a portrait of our best understanding of were the planet is heading absent aggressive action."

His article, which could win a Pulitzer, can be read here.

Unfortunately, debate over the first question is blocking progress on the other questions. We are spending our energy debating if the planet is getting warmer or colder. While most scientists agree it's getting warmer, there are legitimate questions being raised by skeptics. Methodologies, interpretations, and the integrity of climate change data is frequently called into question. And while the scientific method is designed to correct for bias, it seems there is still a lot of bias in the scientific community. Scientists are human, after all.

All the while we argue over whether or not climate change is real, we lose precious time to do anything about it.

If Wallace-Wells is right, we don't have much time left. The process will accelerate and by the time the effects of global warming become undeniable, it will already be too late.

The general public is rightly confused about the issue. Is it happening or not? The scientific consensus is that it is, but there is plenty of room for doubt. Until both the proponents of climate change and the skeptics develop a way to agree on the science, the confusion will remain. Nothing could be more dangerous that indecisiveness in the face of danger. Yet, we cannot make policies based on inaccurate data, for that too would also be disastrous.

If global warming is happening, then we need to develop a plan to adapt to the changes that are coming. And we need to take action to mitigate future warming. How we should accomplish this is an important question. What if the answer to global warming is something terrible, like democide, or forced sterilization and abortions. What if people were no longer allowed to drive cars, or do many of the things we take for granted today?

Or worse, what if global warming is a false flag, intended to scare the public into giving up rights and freedoms we would not otherwise sacrifice? That would be a tremendous and dangerous evil.

Without data that we can all agree on, it's impossible to know.

Humanity is remarkably resilient. It has flourished for tens of thousands of years despite all kinds of threats. Climate change, famine, war, disease, general bad luck, you name it. The human species has always survived. We will survive global warming too. But it is uncertain if modern civilization is sustainable, or if we as a species can cope with the changes we need to make to avoid the worst. And if Wallace-Wells is right, the worst is yet to come, within most of our lifetimes.