Global warming may be swelling the Great Lakes, as officials prep for big changes

As the Great Lakes swell to record levels, public officials must contend with the next to raise bridges due to climate change. 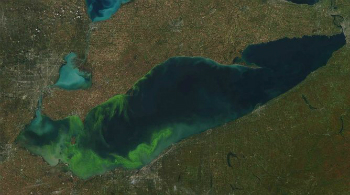 Lake Erie is swelling to record levels. The brig green streaks on the image are caused by algae blooms.

LOS ANGELES, CA (California Network) -- The wet year combined with 150 percent precipitation has caused the Great Lakes to rise to levels just shy of records. Lake Erie is at 573.69 feet while the all-time high record is 574.3 feet, set in 1986. The above-average rainfall falling across North America is leading some planners to contemplate raising bridges.

According to projections, climate change will result in greater rainfall across some parts of North America. This means swollen rivers and higher water levels. The only way to combat the natural changes is to raise the bridges.

FEMA is about to announce new rules, and included in the text of those rules is a statement that floods will become more frequent and severe, due to climate change.

While the public continues to debate climate change, government agencies, including the military are already changing tactics to adapt. More and more signs of climate change are becoming apparent. Still, the debate rages in public, but most people have been forced to concede that the planet's temperature is rising.

Unfortunately, more rain is not always good news. Rain in parts of the country that already get enough means more floods. Likewise, places that are prone to drought might suffer more intense droughts. According to many climate change models, dominant weather patterns are most likely to intensify rather than change completely. They will also become less regular.

It may still be too early to blame climate change for the Great Lake's present volume, but if subsequent years follow the trend, it will be impossible to ignore it.