The polar caps are melting, but there's a greater danger we need to talk about

Free World Class Education
FREE Catholic Classes
The temptation to trample human rights to save ice is the greatest danger.

Sea ice has reached its lowest levels in recent, recorded history according to NASA. Arctic sea ice reached a maximum that is well below average for the winter season. Likewise, the Antarctic just set a record for record ice loss. 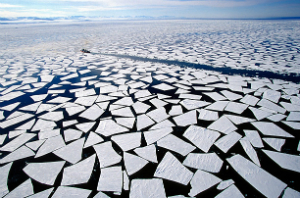 Will the cure worse than the disease? The polar caps melt, then grow back. But there's a greater danger than this lurking among us --our response to the problem.

LOS ANGELES, CA (California Network) -- NASA scientists, using satellite records dating back to 1979, report the Arctic and Antarctic have both seen the lowest ice levels in their brief, recorded history. A number of factors, including a record warm year and storms are thought to be responsible.

The Arctic reached its maximum winter extent on March 7. The high point for the winter ice reached 6.26 million square miles, which is the lowest high point ever recorded since 1979. The extent is 790,000 square miles below average using figured from 1981 to 2010. NASA says the quantity of ice missing is equivalent to the land area of Mexico.

Arctic sea ice is very dynamic because it sits atop water, not land. It is dramatically affected by sea and air temperatures which causes significant fluctuations in the quantity of ice that forms. This past year, the Arctic has been impacted by storms and above average temperatures. Some of this is likely due to an El Nino temperature anomaly in the equatorial Pacific, which caused temperatures around the globe to be warmer than usual. 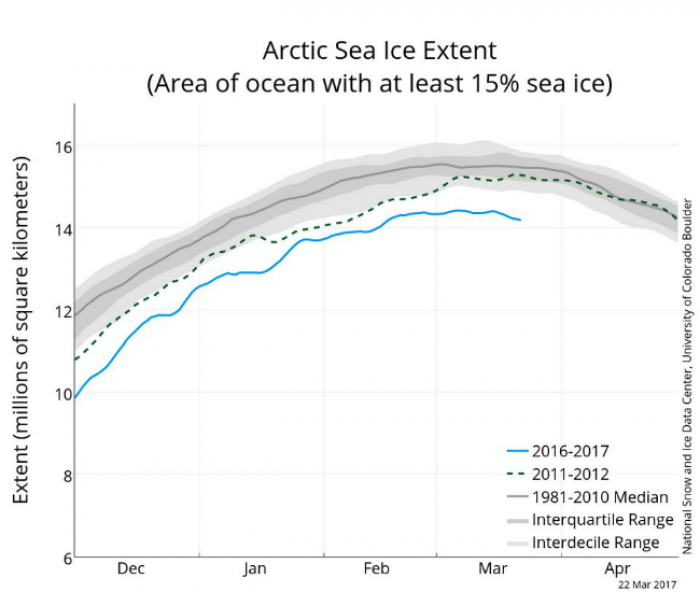 Meanwhile, Antarctica has seen the lowest extent of ice for a summer season. Antarctic sea ice declined to a low of 815,000 square miles, which is 71,000 square miles below normal according to NASA. Until 2016, Antarctic ice was expanding in area.

Warm temperatures are responsible for ice loss in both regions. Ice forms, or melts based on temperature. Currents, winds and other phenomena contribute, but the most critical component in the formula for ice is temperature. But temperature is a complex variable itself, grounded in a wide range of phenomenon. While global warming caused by slowly increasing levels of CO2 in the atmosphere are commonly blamed, there are many other potential contributing factors.

Solar activity, the Earth's orbit and natural phenomena that are only poorly understood are also to blame. We cannot control these factors, we can only adapt to them. However, while the extent of human contribution to global warming is debatable, we should not be blasĂ© about it. Most scientists agree our contribution is the majority of the cause.

Global warming is happening, humans are exacerbating the problem, and it will have an ever-increasing, negative impact on the world in which we live. It is the one contributing variable we can control, and so we should.

But how we control it is also subject to debate, and this is where the discussion should go, now that the scientific establishment largely agrees human activity is causing the problem. How can we curtail activities that pollute without diminishing economic freedom, opportunity, development, and human rights? These considerations are of utmost importance, and matter more than the debatable degree to which human activities are responsible for global warming.

The ice levels at the polar caps are merely a barometer of the planet's temperature, and they are an inconsistent one at that. However, the ice caps are an essential part of our biosphere and their loss could portend catastrophe for the planet. The critical thing is to avert natural disaster, without creating a human rights disaster for the people who live on the planet.