Scientific discovery could rewrite evolutionary textbooks - should we trust science?

Scientists think they will have to rewrite the evolutionary history of the planet after discovering evidence of the first plants. Their evidence suggests the oldest plants evolved 1.6 billion years ago, about 400 million years earlier than previously believed. 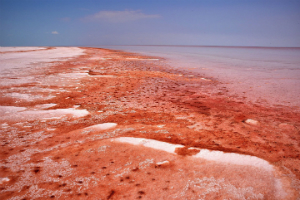 Red algae is still common, and can sometimes stain water the color of blood.

LOS ANGELES, CA (California Network) -- Scientists may have to rewrite the evolutionary history of the planet, following a discovery that challenges their present knowledge. Fossils from India appear to indicate that red algae, one of the simplest and first forms of plant life on Earth, existed 1.6 billion years ago. Red algae was believed to evolve 1.2 billion years ago.

The fossils discovered in India show the same simple, multi-cellular structure of red algae. Red algae is believed to be responsible for forming the oxygen rich atmosphere in which life began to thrive.

Today, red algae is common and is crucial to the development of coral reefs. It is also eaten as nori, a key sushi ingredient.

The need to rewrite the evolutionary history of Earth is important. Science, which is a method of rational inquiry, sometimes yields new information that causes us to challenge old assumptions. When the new information is verified as accurate, it is incorporated into the body of knowledge. Sometimes that means we have to rewrite textbooks. This is not a failure of science, but rather a strength, and an expectation of pursuing rational inquiry. Better information means better knowledge. With better knowledge, we can make better decisions.

While some Christians view science unfavorably, the discipline is embraced by the Catholic Church which operates the world's oldest continuing scientific mission via the Pontifical Academy of Sciences. Science has deep roots, both philosophical and rational which come from religion. Both Christian and Muslim scholars made early and profound contributions to the discipline of science.

Science can help us to understand the world as it was and as it is, and how things work. We can make inferences and predictions about the future. This discipline is of inestimable value to humanity and is responsible for improving our quality of life to modern standards.

However, religion still plays a critical role in the human experience. Religion provides us with a why, and it helps us to make moral decisions. It provides the sense of purpose and the hope of something greater. And certainly there must be because we thirst for this greater knowledge.

Science tells us we thirst only for things that exist. Naturally, the fact we thirst for God also suggests God must surely exist.

So science and faith have their place and their purpose, and we welcome the new understandings science provides, even when it means we have to rewrite the textbooks.