"Please, please, let us not get used to war! Let us all commit ourselves to imploring peace, from our balconies and in our streets! Peace!" Thus proclaimed Pope Francis in his Easter message"Urbi et Orbi" ("To the City and the World"). 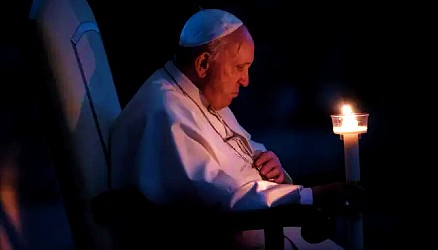 "May the leaders of nations hear people's plea for peace," he urged."May they listen to that troubling question posed by scientists almost seventy years ago: 'Shall we put an end to the human race, or shall mankind renounce war?'" Russell-Einstein Manifesto

To the detriment of our world, leaders of nations ignore this sobering common-sense question.

Nation after nation continues to pour money into war-making and war preparation. According to the Stockholm International Peace Research Institute, world governments are now spending a combined total of $2 trillion per year on their militaries. With just a fraction of that amount of money, we could eliminate world poverty and hunger.

In his Easter message to the world, Pope Francis also highlights the cry of all the "children who suffer throughout our world: those dying of hunger or lack of medical care, those who are victims of abuse and violence, and those denied the right to be born".

Greed, power, nationalism, political influence given to weapons corporations, rationalisation, careers and selfish political strategising are among the illogical and immoral reasons that war and war preparation continues.

Furthermore, the nine nations that possess nuclear weapons continue to spend additional money to modernise their nuclear arsenals. For instance, the U.S. is in the process of a wasteful, dangerous 30-year modernisation plan costing more than$1.7 trillion.

Pope Francis has declared that even possessing nuclear weapons is immoral! Yet most Catholics - both laity and clergy - remain unmoved by the leader of the Catholic Church's denunciation of even having nuclear weapons.

Thus, the major reason that world leaders are not listening to the highly moral call to nonviolent peacemaking and multilateral nuclear disarmament is that most citizens are silent. It is a sad and dangerous example of the "culture of indifference" Pope Francis continues to warn against.

One of the notable exceptions to this unholy silence is Archbishop John Wester, who leads the Archdiocese of Santa Fe in New Mexico. He recently wrote a pastoral letter titled "Living in the Light of Christ's Peace: A Conversation Toward Nuclear Disarmament" in which he states "Pope Francis has made clear statements about the immorality of possessing nuclear weapons, moving the Church from past conditional acceptance of 'deterrence' to the moral imperative of abolition".

And it is worth noting that inspiring Gospel-centred active nonviolent organisations like Pace e Bene Campaign Nonviolence and the Franciscan Action Network are helping to build a world free of nuclear weapons and of all forms of violence.

But we still have a long dangerous way to go. The insanity continues. War, war preparation - including nuclear annihilation preparation -continues unabated.

And so, the troubling question posed by scientists almost 70 years ago, and raised again by Pope Francis in his Easter message to the world remains before us: 'Shall we put an end to the human race, or shall mankind renounce war?'"

Concluding his Easter message on a hopeful and challenging note our Holy Father says, "Faced with the continuing signs of war, as well as the many painful setbacks to life, Jesus Christ, the victor over sin, fear and death, exhorts us not to surrender to evil and violence. Brothers and sisters, may we be won over by the peace of Christ! Peace is possible; peace is a duty; peace is everyone's primary responsibility!"