No one knows who killed Sister Catherine Ann Cesnik. 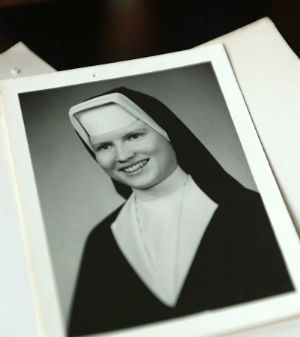 Baltimore, Md. (CNA/EWTN News) - A young nun who was on a year's leave of absence, Sister Cathy, as friends called her, was murdered sometime while running an errand on the evening of November 7, 1969. She was 26 years-old.

Her body was found in a dump two months later, though authorities have never been able to identify her killer.

This summer, a Netflix documentary series called "The Keepers" is reopening the case, talking to witnesses and examining the evidence before the case goes cold forever.

The circumstances surrounding the death of Sr. Cathy are precarious.

A member of the School Sisters of Notre Dame since the age of 18, Sr. Cathy and her friend Sister Helen Russell Phillips both took a leave of absence in 1969 and moved out of the convent into an apartment together.

The chaplain of Keough at the time, Fr. A. Joseph Maskell, was later accused by former students of numerous counts of rape and sexual abuse during his time at the school, which first came to light through accusations made in the early 1990s. Fr. Maskell was subsequently removed from ministry, and fled the United States in 1994. He was never charged with a crime before his death in 2001.

Fr. Maskell has been a longtime suspect in Sr. Cathy's death. Former students of Sr. Cathy believed she knew about the abuses of the priest, as many of the young women felt comfortable confiding in her. Many believe that Fr. Maskell, who was also the chaplain of the Baltimore police at the time, murdered Sr. Cathy to keep her quiet and used his connections to cover up his crimes.

The Archdiocese of Baltimore has always denied claims of a widespread conspiracy to cover up Sr. Cathy's death and to hide the crimes of Fr. Maskell, and it maintains that the archdiocese had no prior knowledge of the sexual abuse of Fr. Maskell or his connection to Sr. Cathy until the '90s, when several victims came forward. There is no hard evidence to suggest that the archdiocese was involved in a cover-up of the case.

"Suggestions of a cover-up by the Archdiocese are speculative and false," the archdiocese said in a recent statement outlining talking points before the release of the Netflix series.

"The Baltimore Sun has retracted its 'errors' for reporting that certain police supervisors suggested Archdiocesan interference in 1969-70 since the people cited had actually retired before (sometimes years before) the relevant time-frame," the archdiocese said.

"The Sun also noted the numerous police officials who stated they knew of no such interference. There is no suggestion that the Archdiocese interfered in any way when the subsequent investigations were occurring in the 1990s. The Archdiocese reported the initial sexual abuse allegation to the authorities in 1993, removed Maskell from ministry and held a public meeting in 1994, and has been transparent with an Independent Review Board since that time."

Baltimore City police began working the case, focusing on suspects in the Catholic Church. The Baltimore County police took over the case when Sr. Cathy's body was found two months after her disappearance.

According to reports, she was found with trauma to the head, possibly from a hammer. The discovery of her body barely made the news - the local papers were on strike at the time.

Because the alleged abuse of Fr. Maskell had not been reported to the archdiocese or the authorities in 1970, when Sr. Cathy's body was found, Fr. Maskell was not originally investigated as a suspect in the case.

Earlier this month, local media reported that the Baltimore County police exhumed Fr. Maskell's body to conduct DNA testing, ahead of the Netflix series that closely links him to Sr. Cathy's murder.

There were few others investigated as possible suspects when the case opened in 1969.

On the night of Nov. 7, 1969, when Sr. Cathy disappeared, she had driven to Catonsville to cash a check, and then went to a bakery in the Edmondson Village Shopping Center. When she didn't return after what was supposed to be a brief errand, concerned roommate Sr. Helen Phillips contacted Fr. Gerard Koob, a close friend and alleged romantic interest of Sr. Cathy.

Fr. Koob and a friend drove to the women's apartment, and after talking to Phillips and hearing nothing from Sr. Cathy, they contacted the authorities to report her as a missing person.

Koob, now a Methodist minister, was thoroughly questioned by authorities at the time. His story that he had been at the movies with a friend that evening before learning of Sr. Cathy's disappearance has held, and he has passed two lie detector tests regarding his whereabouts that night.

Lacking leads and new evidence, the case went cold around 1975, but was picked up again in 1992, after a woman named Jean Wehner came forward and reported that she had been abused at the hands of Fr. Maskell.

The archdiocese removed Fr. Maskell from ministry and sent him away for counseling and evaluation. Having no hard evidence against him, he returned to ministry in 1994.

At that time, Wehner revealed to police that Fr. Maskell had taken her to see Sr. Cathy's body to "show her what happened to people who crossed him," according to the Washington Post, and several other abuse victims came forward to accuse the priest.

The Baltimore County police then questioned Fr. Maskell about the case, but he denied both the allegations of murder and of sexual abuse. He was permanently removed from ministry by the archdiocese in 1994, and he fled to Ireland in 1996 without the knowledge of the archdiocese.

"It became a healing process for a number of them," Sheldon Jacobs, an attorney for the victims, said of the settlements reached in 2016.

"Quite a few of them thought it was a cathartic experience," he told The Washington Post.

The archdiocese said that it was willing to provide comment and to answer questions for the producers of the new Netflix series about the case.

"Unfortunately, the producers asked very few questions of the Archdiocese before releasing the series and did not respond to the Archdiocese's request to receive an advanced copy of the series. Advanced copies were provided to media outlets," the archdiocese notes on its website.

Ahead of the series, the Archdiocese of Baltimore has published answers to several frequently asked questions regarding the case of Sr. Cathy, and has reiterated the importance of its "zero tolerance policy" and sexual abuse screening and prevention training for its volunteers and employees.

The seven-part Netflix series "The Keepers," directed by Ryan White, is set to debut on May 19.