Don't' miss "Game of Your Life" on Friday night as Family Movie Night wraps up its second year providing great entertainment that families can enjoy together. Over the past year, FMN has heard from thousands of Family Movie Night fans. Parents have told them that they love to experience the excitement and suspense of action and adventure movies with their kids. Continued support of each Family Movie Night event will play a crucial role in getting the word out and keeping great television shows on the air. 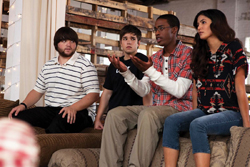 WASHINGTON, DC (Catholic Online) - Have your kids to turn off the Wii and stop texting. Gather them around the television on Friday night, December at 8:00pm Eastern (7:00pm Central) for the newest Procter & Gamble and Walmart Family Movie Night event. Teenagers will especially enjoy  "Game of Your Life," the story of four tech-savvy young people who are given the opportunity of a lifetime.

Many films created for the youth of today have focused on athletics or other related pursuits. "Game of Your Life" is different. College freshman Zach Taylor (Titus Makin Jr., "Glee" and "A Cinderella Story: Once Upon A Song") lands a scholarship to the prestigious Digital Institute of Game Design, led by billionaire gaming icon Marcus Bentton (Tom Nowicki, "The Blind Side").

His future will be promising if he can pass the infamous freshmen project that eliminates more than half of the class within the first three months. "Game of Your Life" underscores the importance of loyalty, family and friendship as Zach teams up with three other college students who will experience real-life challenges that threatens their victory in the virtual world.

With his widowed father in financial trouble, Zach also has a choice to make, whether to accept an invitation to do some freelance game design, something forbidden to early freshmen. His decision causes serious problems for him as well as others.

With nowhere else to turn, he confides in Professor Abbie Lambert (Lea Thompson, currently on "Switched at Birth" but best known for "Back to the Future," and "Caroline in the City") and is forced to make a decision that will affect his future and the lives of everyone around him.

Nathan Kress and Adam Cagley are especially fun to watch as the geeky Phillip and Donald. Their interactions - almost all of which were improvised as the movie was being filmed - provide a strong backstop for the main story, how Zach learns some serious lessons about making choices.

Watch "Game of Your Life," the latest installment in the P&G/Walmart Family Movie Night this coming Friday evening at 8/7c on NBC. You can find "Game of Your Life" on Facebook, so please stop by and "Like" this film!